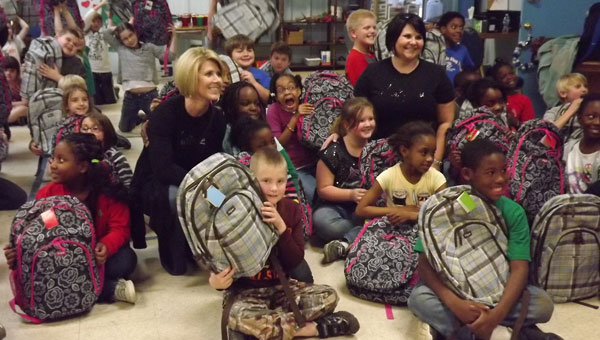 The annual Christmas party was a hit as the kids enjoyed hot chocolate and decorated sugar cookies and received backpacks from Thirty-One.

“The party went great, and everyone had a wonderful time. It’s a passion of mine, so it was right up my alley,” Ussery said.

This was the second year that Thirty-One designed the Thirty-One Gives program to give bags to Boys and Girls Clubs. The company held a go-go sale, where customers purchased products, and a percentage of the sales goes back to the community.

“You buy one, we give one,” Ussery said.

Thirty-One consultants held a toy drive and gave backpacks to Boys and Girls Clubs across the state.

“This is our mission,” Ussery said. “We are a company that empowers others. ‘Encourage, empower and reward’ is our mission statement. In doing so, this is our way of giving back. It’s truly been a mission from day one.”

Thirty-One also held a toy drive, and donated a toy to each child in his or her backpack.

“Just the looks on their faces was an awesome ministry for me,” Parker said.

Freda Shivers, Boys and Girls Club of Montevallo Unit Director, said the kids had a great time during the party, which was held at 420 Vine Street. The party was more well-attended than years past because Montevallo Elementary is closed until after the holidays.

“We were planning (the party) a few weeks ago for our after-school kids. Probably 15 to 20 of these kids were not in our after-school program,” Shivers said. “Normal attendance is about 20, but we have about double what we normally have because of the situation at the school.”

Chelsea couple lights up the holidays

The Culpepper’s residence is reflected on the lake in front of their Chelsea home. (Reporter Photo/Jon Goering) By CHRISTINE BOATWRIGHT... read more