Chelsea couple lights up the holidays 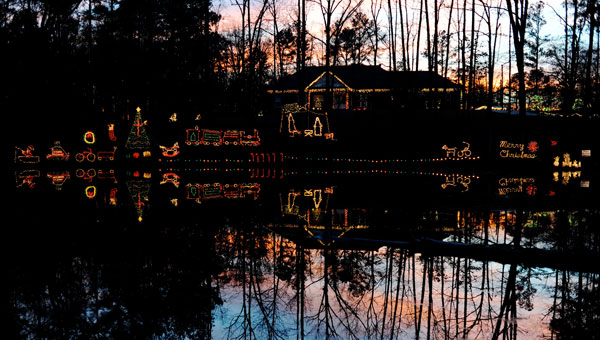 The Culpepper’s residence is reflected on the lake in front of their Chelsea home. (Reporter Photo/Jon Goering)

CHELSEA – A Chelsea couple creates a Christmas wonderland at their lakeside home each holiday season.

Mike and Cindy Culpepper are the grandparents of six, and continuously add handmade decorations to their Christmas display every year.

Mike Culpepper, a chemistry teacher at Thompson High School, builds decorations every year. The Culpeppers’ yard now hosts a manger scene, a steamboat, a boat with Santa fishing, a rocking horse, a bicycle and train, as well as a sign wishing Jesus a happy birthday.

“I just thought it would be cool to literally make the decorations themselves instead of simply buying them, thus they are unique. I try to make a new one each year,” Mike said. “Thus, now after a couple of years, the yard is getting full. The kids try to influence me and give me ideas. Sometimes the creation can be involved, but sometimes I’m just trying to get something done, so it is not that impressive.”

To create the decoration, Mike uses wire fencing and lights, as well as rebar and wood.

“I do it for our kids and grandkids,” he said. “I certainly do not want to ‘go over the top’ and look vain. I try to do it in taste, but it does look pretty good, especially overlooking the lake.” 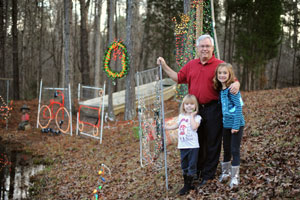 Mike Culpepper stands among the decorations that light up his yard with his granddaughters, MJ Smith, right, and Jo Jo Lee, left. (Reporter Photo/Jon Goering)

Cindy Culpepper called the creation a “winter wonderland in the backyard,” which Mike begins setting up on the first of November each year.

“We’ve had nine years in this house, and every year he has added something new to it,” Cindy said. “We have six grandchildren, and they’re the biggest reason he keeps going with it. It’s cool to do it for them. We enjoy it, and they enjoy it. It’s a lot of fun and a lot of work, too.”

When the Culpeppers were newly married, about 40 years ago, Cindy began collecting her Christmas village. She also decorates a family Christmas tree, a children’s tree and a more formal tree with Thomas Kincaid ceramic ornaments and other collectables.

“We’re all family-oriented, and Christ is in the center of it,” Cindy said. “That’s the biggest reason, the only reason for the celebration. We enjoy the Christmas and holiday spirit.”