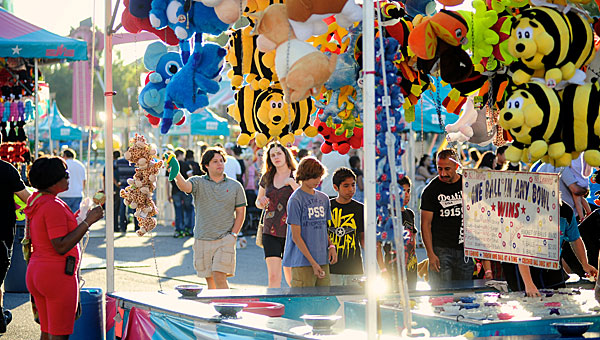 Bloomberg Businessweek noted the Alabama State Fair at the Oak Mountain Amphitheater in naming Pelham the "Best Place to Raise Kids" in Alabama for 2013. (File)

The national news agency released its “Best Places to Raise Kids 2013” list on Dec. 18, and named one city from each state to the list.

Through the list, Businessweek evaluated more than 3,200 towns and cities nationwide with populations ranging from 5,000-50,000.

Pelham Mayor Gary Waters said Businessweek confirmed something he and his wife have known for years.

“My wife and I raised three kids here, so we knew it all along,” Waters said with a laugh. “I’m not surprised, but I’m thankful for all the assets we have that have brought us to this point.

“I hope it will jumpstart some residential growth and bring some new folks to the city. We’d be glad to have them,” Waters added.

Waters said making the list was an honor, because the city did not submit an entry to be named to the list.

Data for the list came from Greatschools.org, the FBI, the U.S. Census Bureau and the U.S. Bureau of Labor Statistics, according to the website.

In its summary of Pelham, the website praised the city for hosting the annual Alabama State Fair and for containing Oak Mountain State Park.

“This Birmingham suburb is home to the Alabama State Fair, where this summer, participants in the agricultural club 4-H showed off their rabbits and dairy goats in a livestock contest,” read Pelham’s entry. “While waiting for next year’s fair, kids can hike, bike or ride horses at Pelham’s Oak Mountain State Park, Alabama’s largest state park.”

FROM STAFF REPORTS MONTEVALLO – The Montevallo Police Department is warning citizens of an ongoing telephone scam in which the... read more