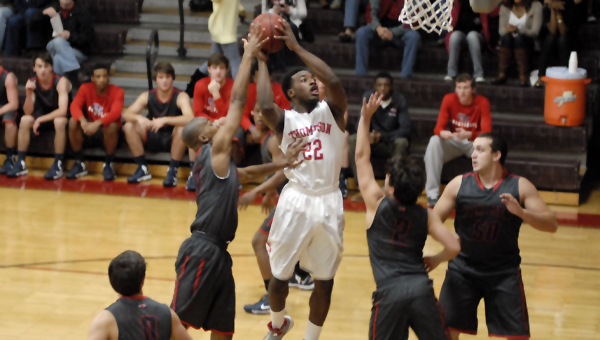 COLUMBIANA – The Thompson Warriors overcame a slow start with a 24-point second quarter to take a 52-29 win over the Oak Mountain Eagles Dec. 21 at the Shelby County tournament hosted by Shelby County High School.

The Warriors took a 9-3 lead with 4:26 left in the first quarter then both teams went on a drought the rest of the quarter.

The Thompson offense came alive in the second with an 11-0 run to take a 20-3 advantage. The Warriors then closed the first half on a 10-4 run to take a 33-8 halftime lead.

Thompson continued to pull away from the Eagles in the second half when they led as much as 20 in the third quarter.

Oak Mountain outscored Thompson 11-5 in the final eight minutes, but the Warriors advanced to the tournament championship game with the 52-29 win.

Caleb Johnson led all scorers with 15 points for the Warriors. Marcus Lewis and DeAndre Gamble each scored points.

Thompson will take on Shelby County in the boys’ championship game at 6 p.m. at the University of Montevallo.

By MICKEL PONTHIEUX / Sports Reporter The Thompson Lady Warriors moved on to the championship game of the Shelby County... read more