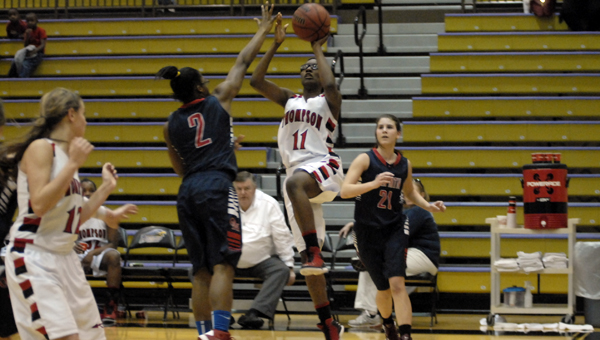 Thompson's Taylor Underwood shoots for two of her seven points in the Lady Warriors' 47-36 win over Oak Mountain in the girls' championship game of the Shelby County tournament Dec. 22 at BankTrust Arena. (Reporter photo/Mickel Ponthieux)

MONTEVALLO – The Thompson Lady Warriors used a stifling defense to take a 47-36 victory over the Oak Mountain Lady Eagles Dec. 22 in the girls’ championship of the Shelby County tournament at the University of Montevallo’s BankTrust Arena.

“It’s been several years since we’ve (won the county tournament),” said Thompson head coach Cara Crosslin. “We have been working really hard through the off-season and they deserve it.”

The Lady Warriors (10-5) jumped out to an 8-0 lead midway through the first quarter to take a 12-7 lead into the second. Thompson forced 10 Oak Mountain turnovers to spark their offense.

“Our defense did a really good job,” said Crosslin. “They pursued to the ball and was trapping to get things going. They did a good job of keeping the pressure on the ball and it turned into points.”

Oak Mountain’s Christian McGowan hit a 3-pointer for the Lady Eagles to pull them within four. Thompson answered when Deja JeanPierre led the Lady Warriors on a 7-0 run to take a 25-14 lead at the half.

The Lady Eagles scored four quick points to start the second half to pull within seven, 25-18.

The Oak Mountain run didn’t derail the Lady Warriors as Thompson went on a 7-2 run to take their largest lead of the game, 32-20, with just over 2 minutes left in the third quarter.

The Lady Eagles battled back to chip away at the Thompson advantage with a 5-2 run to end the quarter for a 37-25 score headed into the final quarter.

Oak Mountain went 5-for-8 from the free throw line in the first two minutes of the fourth to cut the Thompson advantage to 39-29. The Lady Eagles drew as close as eight points in the final minute, but Thompson went 3-for-4 from the line in the last 15 seconds to seal the 47-36 victory for the tournament championship.