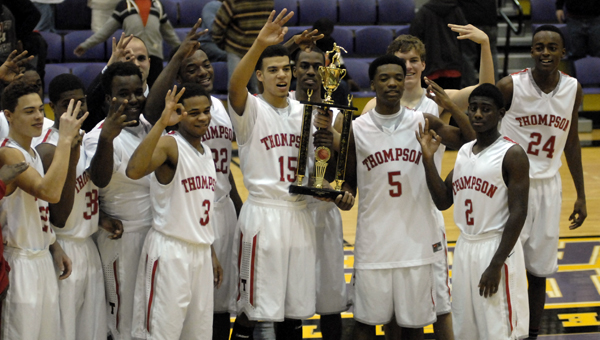 The Thompson Warriors captured their third consecutive Shelby County tournament championship with a 51-41 victory over the Shelby County Wildcats Dec. 22 at the University of Montevallo's BankTrust Arena. (Reporter photo/Mickel Ponthieux)

MONTEVALLO – The Thompson Warriors checked one achievement off their list Dec. 22 when they won the Shelby County basketball tournament for the third straight year with a 51-41 victory over the Shelby County Wildcats.

“We put a lot of emphasis on winning this tournament,” said Thompson head coach Patrick Davis. “This county year in and year out has good players, good coaches and good teams. We make it a goal and feel like if you win this tournament – it says something.”

The 2012 boys’ championship started out as a defensive battle when both teams scored in the single-digits in the first quarter. The Wildcats went on a 5-1 run midway through the opening quarter to take an early 8-5 lead.

Shelby County extended their lead to five to start the second, but the Thompson offense came alive. The Warriors went on a quick 6-0 run to take an 11-10 lead midway through the second quarter.

Shelby County regained the lead on a Tyler Madison field goal, but Thompson closed the first half on a 6-2 run to take a 17-14 lead at the half.

“They did a good job of mixing it up (on defense),” Davis said on Shelby County. “We were a little stagnant early, but we did a good job at defending when we weren’t scoring.”

The Wildcats came out hungry in the second half and went on an 8-0 run led by Justus Martin. Martin scored all six of his points at the beginning of the third to give Shelby County a 24-21 lead.

The lead changed hands three times late in the third ending when the Warriors closed the quarter on a 4-0 run to take a 32-29 edge into the fourth.

Caleb Johnson and Marcus Lewis combined on three 3-pointers to start the fourth quarter to give Thompson a 41-33 lead.

Shelby County was able to cut the deficit down to six in the last two minutes, but went scoreless until Madison added a lay-up just before the final buzzer.

Thompson's Taylor Underwood shoots for two of her seven points in the Lady Warriors' 47-36 win over Oak Mountain in... read more