Citizens can see life behind the badge 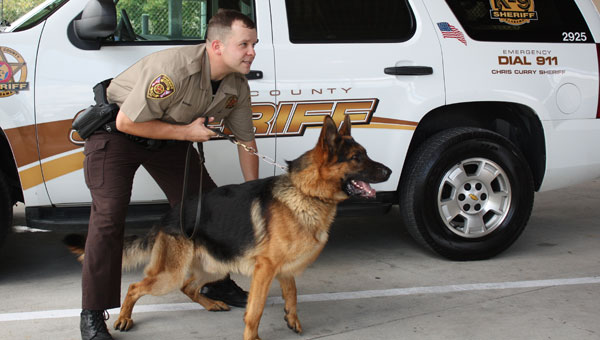 Shelby County Citizens Sheriff’s Academy will have a course dedicated to the Sheriff’s Office’s special units, such as the K-9 unit. (Contributed)

COLUMBIANA – For Shelby County residents looking to experience life behind the badge of a sheriff’s deputy, the Shelby County Sheriff’s Office will hold its first Citizens Sheriff’s Academy in March.

The 12-week program will offer everything from firearm safety training, practice on the sheriff’s gun range, a ride-along with a deputy and a tour of the Shelby County Jail.

Dr. Richard Dormuth, a retired college administrator who volunteers with the Sheriff’s Office, enrolled in the Homewood Police Department’s citizens academy and had an “excellent experience.” Dormuth currently is formulating the 12-week Shelby County Citizens Sheriff’s Academy that will begin March 7 at the Sheriff’s Office.

“We’ve had this idea and had wanted to develop it for a number of years, probably over four years,” Sheriff Chris Curry said. “We weren’t able to do it because we didn’t have enough staff. The emergence of Dick Dormuth, his background and experience, is what made it happen. He’s quite qualified and a capable individual.”

The courses typically will be held at the Shelby County Sheriff’s Office Training Center in Columbiana on Thursdays from 7-8:30 p.m. The first and third courses will be in the main building of the Sheriff’s Office.

“We want to provide people with the opportunity to learn more about the agency that protects them,” Dormuth said.

Each week will showcase law enforcement topics such as laws and the court system, criminal investigations division, the drug task force, the tactical response unit and the K-9 unit, as well as others. In mid-May, participants will use the firearms range.

Curry called the program a “crash course in what a law enforcement agency does.”

“We felt all along it’s very important the citizens be involved in all aspects of their county or city government, but particularly in public safety,” Curry said. “The more knowledgeable and capable the citizens are, the safer the citizens are going to be.”

The program has a 20-person limit, and is free to those who qualify to participate. The program is open to anyone 18 or older who lives or works in Shelby County and passes a criminal background check and driver’s license check. Dormuth said the program will be offered twice a year.

“I think the citizens will benefit because they’ll get a much better picture of what the Sheriff’s Office does,” Curry said. “There’s no better way to understand what it’s all about than to come and do it.”

For more information, visit Shelbyso.com and click on “My Shelby SO.” The link leads to the application package and additional information. Contact Dormuth at ddormuth@shelbyso.com with questions.