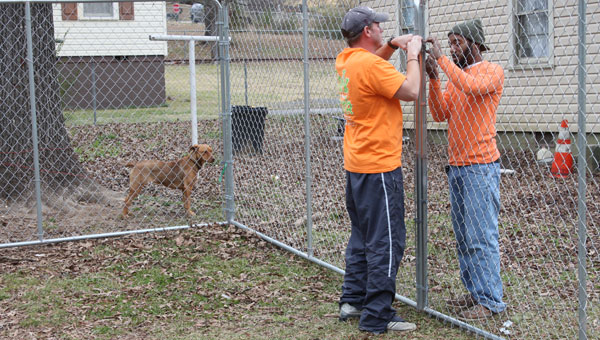 CALERA – Calera dogs Red and Tunchie were given an early New Year’s present through an anonymous donation from the Shelby Humane Society Dec. 31.

SHS was able to provide a 20 feet by 20 feet pen for the two dogs, which are owned by Calera resident Sherry Johnson, at their home off Shelby County 16.

About three months ago, through the help of the Calera Police Department, the Humane Society began working with Johnson, who receives disability benefits, to help her keep her two dogs through the Training Wheels Program. 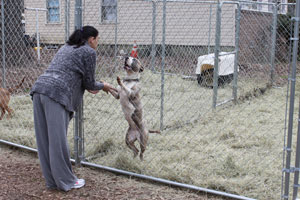 The dogs, a pit bull and a mixed dog, had little room to run, and were in need of doghouses, which the SHS provided. The program is designed to “help people keep their animals,” SHS Executive Director Sara Shirley said.

When the anonymous donor heard of the situation, the person “pulled through for the dogs,” Shirley said.

“We want to get the message out there that if people need help, call us,” Shirley said.

In addition to providing the fencing, fresh hay for bedding and dog food, the SHS will foot the bill for spaying or neutering both dogs and one of the family’s cats, in addition to two other cats that have been spayed or neutered.

“We’re so thankful. This is really, really sweet of them,” Johnson said. “I really appreciate this, me and my kids.”

While watching the SHS employees put the fencing together, Johnson said she wanted to see the dogs enjoy the pen.

Make a friend for the new year

FROM STAFF REPORTS These two amazing cats are looking for new homes for the new year! Lula-Carter and Stingy need... read more