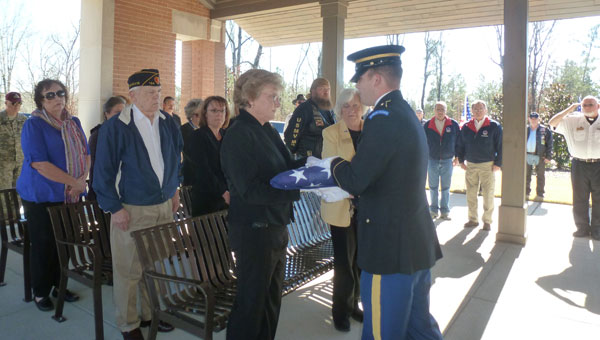 Johnnie Lee Walker served our nation as a soldier during the Vietnam Era but died alone, a homeless vet in a group home destined to a pauper’s grave.

But fate — or maybe an angel unaware — stepped in.

Walker was buried at the Alabama National Cemetery with full military honors instead of Potters Field in Morris.

Patriotism and love of country are second nature to Mary Kendrick Lewey who has many family veterans and is Regent of the DAR Josiah Brunson Chapter. When she read in the paper that Walker, a veteran, was going to be buried in a pauper’s grave, she felt that was not right.

Lewey made a decision to see if Walker could be buried at the Alabama National Cemetery. She called the cemetery, Veterans’ Administration, and last Lt. Col. (Ret.) Glenn Nivens of the Blue Star Salute Foundation Inc. Soon many were involved in Lewey’s quest.

Walker’s military service record, Form DD 214, was located which qualified him for burial. Walker entered the US Army Nov. 29, 1966, and was released from active duty (Honorable Discharge) Nov. 8, 1969.

Rockco’s donated the casket and provided transportation; C.W. Posey, president of the Alabama Society of SAR, donated a suit of clothes; and the cemetery provided all other expenses.

Rick Brandt, ride captain of the Patriot Guard Riders, led motorcycle honor guard who also served as pallbearers. Cranston gave the eulogy and Brandt presented Lewey with a Patriot Guard Riders coin and played the National Anthem on his harmonica. Taps were played and Lewey was presented Walker’s folded flag by soldiers.

Johnnie Lee Walker was laid to rest among his fellow soldiers thanks to his angel unaware and many others who cared. May he rest in peace.