HARPERSVILLE – A beloved member of the Harpersville community passed away Jan. 1.

“It’s cliché when a lot of people pass, you always focus on the good things, and never talk about the bad things, but with him there really is no bad,” said daughter-in-law Brittany Perkins, who is Theoangelo Perkins’ wife. “I was honored to be his daughter. He never introduced me as his daughter-in-law; I was always his daughter.” 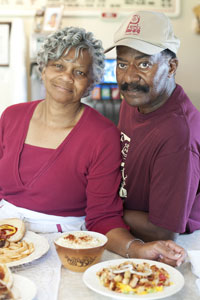 Theolphus and his wife of 47 years, Frances, opened Perk’s Barbecue in Harpersville in 2001. Frances Perkins decided to close the restaurant while the family makes funeral arrangements, but plans to reopen the business in the future, Maxine Perkins said.

The couple lost daughter Loretta Perkins to cancer in 1986.

Maxine Perkins, Theolphus Perkins’ sister, said her brother was the third of 12 children.

“Every family seems to have a center, a heart of the family, and he was ours,” Maxine Perkins said. “He was a master storyteller. He could tell a story, and everyone would be laughing and cracking up. If he walked into the room, he was going to be the center of attention. He had a magnanimous personality and set a story up beautifully.”

“The personal memorials have not stopped. They’re just flowing in,” Maxine Perkins said. “He affected people no matter where he was. His life is just remarkable. And I just can’t believe he’s gone.”

Theolphus Perkins’ funeral will be at Vincent High School on Sunday, Jan. 6 at 1 p.m.