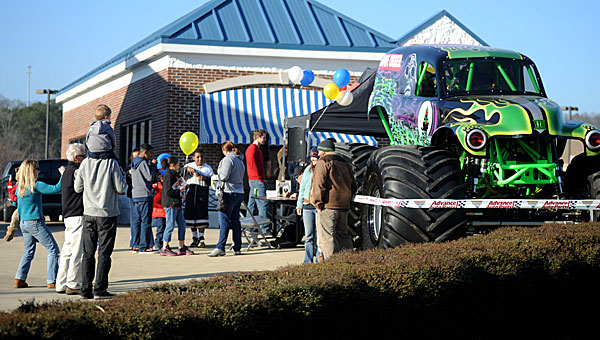 Visitors to the Express Oil Change on Alabama 119 in Pelham are dwarfed by the Grave Digger monster truck on Jan. 3. (Reporter Photo/Jon Goering)

Monster Jam fans got an up-close look at one of the most iconic monster trucks in the world on Jan. 3, as the famous Grave Digger truck rolled into the parking lot of the Pelham Express Oil Change on Alabama 119.

The stop came one day before the same Grave Digger truck, one of eight in continuous operation around the world, was scheduled to compete in a two-day Monster Jam event at the Birmingham-Jefferson Convention Complex.

Pelham Express Oil Change Director of Operations Shane Ward said the business secured the visit through a partnership with Advance Auto Parts, the main sponsor of the Birmingham Monster Jam.

When it arrived in the back of a white tractor trailer, the Grave Digger truck sat on a set of relatively miniscule tractor tires small enough to allow the monster truck to fit into the 18-wheeler. Crews then drove the truck across the parking lot before jacking it up to install the large monster truck dirt tires, each of which costs more than $3,000.

“I’d say it took us about 10 to 15 minutes to get the truck set up. It’s really not bad,” said Grave Digger Crew Chief Rick Steffens. “We have everything we need with us for the weekend.”

Steffens said the Grave Digger truck produces about 1,500 horsepower and between 1,200-1,300 pound feet of torque – exponentially more than a typical vehicle.

The event brought a steady stream of visitors both young and old who were eager to talk to Steffens about the upcoming Monster Jam.

Ward said he expected the mammoth vehicle to draw plenty of attention during rush-hour traffic on Alabama 119.