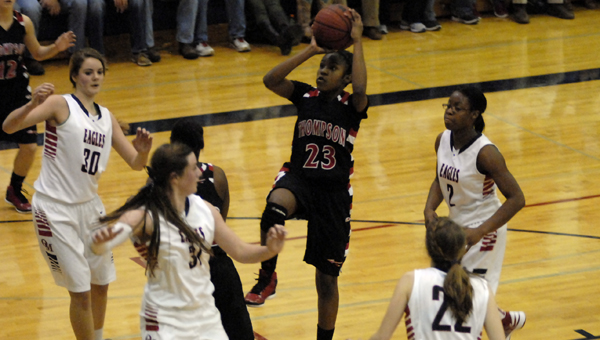 Thompson jumped out to a 5-1 lead early in the first quarter, but the Lady Eagles took the lead twice in the final three minutes of the quarter. However, the Lady Warriors ended the first on a 6-1 run to take a 11-9 lead.

Thompson extended the lead with five straight points by Kiarra Pellway for a 16-9 lead early in the second. Oak Mountain went on a 7-2 run to draw within two in the last two minutes of the half and trailed 22-19 headed into the intermission.

The Lady Warriors started the second half by allowing just one Oak Mountain field goal in the first minute, but held the Lady Eagles to just one point while scoring 15 points of their own to take a 37-22 advantage into the final quarter.

Oak Mountain answered with a 12-point fourth quarter, but it wasn’t enough to cut into the deficit as Thompson followed with another 15-point effort to take the 52-34 win.

Kelsea Bivins finished with a game-high 15 points while Pellway scored 12 points for Thompson.

Thompson takes seventh at The Clash