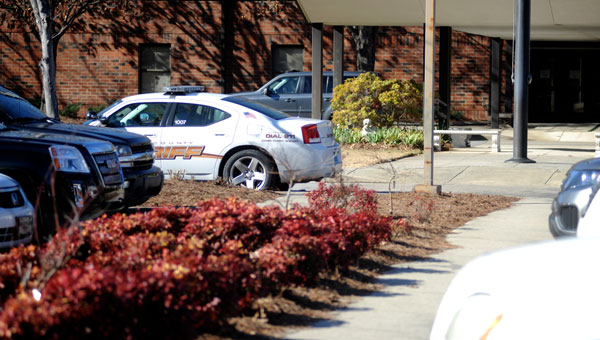 Shelby County Sheriff’s deputies were welcomed to their posts in a number of Shelby County schools beginning Jan. 2.

After the Newton, Conn. school shooting in December, the Sheriff’s Office placed deputies in schools prior to the Christmas holiday. After the holiday break, however, Sheriff Chris Curry decided to continue the deputies’ school assignments from Jan. 2-4.

“I think our parents have been glad to see him here. It’s made us feel more secure — our teachers as well,” said Mt Laurel Elementary Principal Angela Walker. “The police officer is almost like a celebrity. He’s been well received by the students, and hasn’t caused any alarm.

“It concerned me in the beginning that it may alarm some people,” Walker added. “We let parents know ahead of time they would be here as a precautionary measure. My parents were very concerned they may not be there after Christmas.”

Walker said she isn’t certain if the deputies will stay in the schools, and is waiting for more information from the Shelby County Board of Education.

Chelsea High Principal Jay Peoples said having a school resource officer at CHS is routine. Two deputies consistently patrol the nine schools the Sheriff’s Office covers, which include schools in cities without police departments and schools in unincorporated Shelby County.

Oak Mountain Middle Principal Larry Haynes said a school resource officer was a constant presence in his school until last school when the deputies were removed due to financial cutbacks with the Sheriff’s Office.

“We are glad to have somebody coming in every day,” Haynes said. “It’s comforting to everybody. There are so many positive things that come with having an officer, because the kids build a good, positive relationship with an officer being in the school. They see the officers as someone there to assist and help, and everyone looks at it as a positive thing.”

Christine Hoffman, principal of Inverness Elementary, said she hasn’t heard many students talk about the school shooting in Connecticut.

“I haven’t seen a lot of reaction from the children, but it’s been very comforting for the parents (to have a deputy in the school),” Hoffman said.

Hoffman said another positive side effect is having the Sheriff’s Office build a relationship with the schools.

“They’re seeing our school and what it’s all about,” she said. “I think it’s been a good partnership, as well as the safety side of it.”

Bill Harper, principal of Chelsea Middle, said he has been “informally discussing” the school’s security issues.

“I know I speak for every principal when I say that even before we came back that Monday, I know we were all reviewing, at least mentally, what our emergency plans were just to make sure,” Harper said. “It’s something you don’t like going through, but you have to. No one wants to contemplate ‘do I really have to use this,’ but you have to.”