HOOVER – The Spain Park Jaguars ended play in the 2013 Bellini’s Jaguar Classic with a 55-50 overtime victory over the Hewitt-Trussville Huskies Jan. 4 for third place in the tournament.

“Our kids battled and we were able to make some shots that we weren’t able to make the past couple games,” said Spain Park head coach Neal Barker. “I’m proud of them for hanging in there and fighting through a little adversity and finding a way to win a close one.” 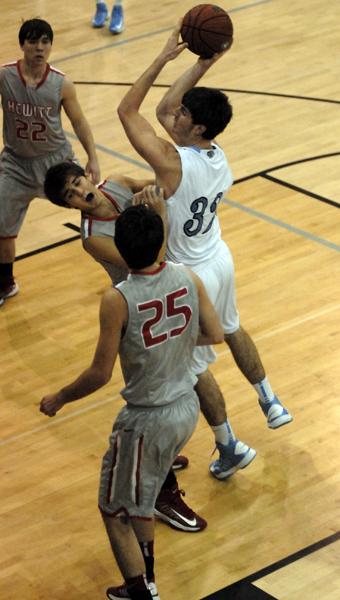 Spain Park's John Elliott fights his way to the basket in the Jaguars' 55-50 victory over Hewitt-Trussville in the third place game of 2013 Bellini's Jaguar Classic. (Reporter photo/Mickel Ponthieux)

Trussville came storming back to end the third when Jarvis Calhoun hit four straight 3-pointers, including a catch-and-shoot shot at the buzzer which capped a 12-3 run to give Hewitt-Trussville a 37-36 lead headed into the fourth.

“Hewitt is a good team and Calhoun is a good player,” said Barker. “He made some shots that you just can’t guard. Drew Morgan did a heck of a job on him tonight.”

The lead changed hands four times in the fourth quarter and ended in a 45-45 tie to send the game into overtime.

Spain Park started the extra four minutes with three consecutive stops which led to five points to give the Jags a 50-45 lead.

“It’s always important to get the first basket in overtime, especially in high school with no shot clock,” said Barker. “We were able to get a stop and score the next two times down. That was huge.”

Hewitt-Trussville cut the deficit to two with 18 seconds left, but Spain Park went 4-for-4 from the free throw line to seal the 55-50 victory.

Calhoun led all scorers with 24 points for the Huskies, with 14 points coming in the third quarter.

By MICKEL PONTHIEUX / Sports Reporter Briarwood Christian and Chelsea High School will compete at the 2013 Bama Shootout at... read more