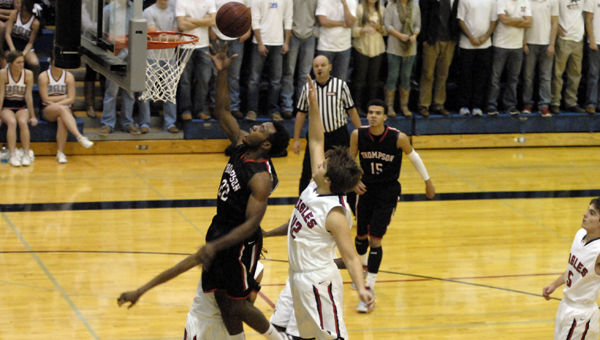 Thompson's DeAndre Gamble drives to the basket for two of his eight points in the Warriors' 60-28 win over Oak Mountain Jan. 4. (Reporter photo/Mickel Ponthieux)

NORTH SHELBY – The Thompson Warriors began 2013 with a statement as they defeated county-rival Oak Mountain Eagles 60-28 Jan. 4 on the road.

Thompson (19-2) took a 18-4 lead after the first quarter of play while holding the Eagles scoreless for nearly seven minutes. The Warriors added 11 points in the second to take a 29-9 lead at the half.

The Warriors opened the second half on a 9-2 run to extend the lead to 38-11 on their way to a 42-15 lead headed into the fourth quarter.

The Eagles battled basket-for-basket to start the fourth, but a 3-pointer by Caleb Johnson with over four minutes left gave Thompson a 30-point lead and a running clock. The Johnson three sparked a 7-2 run by the Warriors for the 60-28 final score,

Johnson led all scorers with 19 points with Rashad Strother adding 13 points for Thompson.