2013 New Year’s resolutions and such 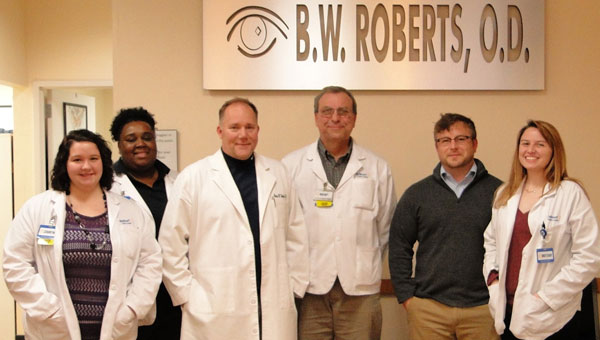 New Year’s Eve has always been a time for looking back, and more importantly, forward to the coming year. It’s a time to reflect on changes we want to make and resolve to follow through on them. I stopped in Walmart Vision Center to ask what changes they see happening — no pun intended.

“My time is taken between my children, their sports, my wife and my business,” Roberts said. “But I want to be more productive in my business as far as charitable work. I believe you can always go the extra mile, so I will focus more on my patients, too.”

Some of the center’s employees have set goals. Rodney Barnes’ is to exercise more often.

“I’m going to walk 3 miles a day after work, as long as it’s not thundering, lightning or raining.”

Stephanie Dejarnett has sworn off resolutions since not attaining a change in marital status this year.

Courtney Wilson said hers is the same as everybody’s — lose weight.

“I don’t know how, but whatever it takes. No more Reese’s Sticks.” This brought laughter from Dejarnett to which Wilson responded, “You eat ‘em too Steph. Don’t even throw a lie on me.”

“If changes are needed you can’t put them off to next week or next month, it should be today. I’m a senior at the University of Montevallo and I decided in September to put more effort in my school work, not wait until January to begin.”

Shaun Morgan has not even thought about resolutions, but spending more time playing his guitars may be on the horizon. He affirmed my suggestion that perhaps there’s nothing he needs to change, then added “but my wife would argue with you.”

Walmart Vision Center is located in Calera Walmart. For an eye appointment, call 668-2633.

Hooping it up for fitness