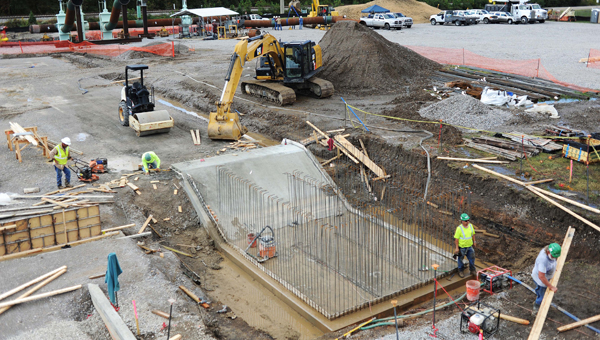 A new cooling tower currently under construction at the Colonial Pipeline tank farm in Pelham helped to drive up the number of new commercial building permits in the city for 2012. (File)

Pelham saw an increase in its number of new homes and businesses in 2012 compared to the previous few years, city officials said after receiving the year-end permit numbers.

The majority of the new home building permits in 2012 were issued in the Ballantrae subdivision, which is near Pelham’s eastern city limits.

Developers began constructing homes in a few new sections of the subdivision in 2012. The Ballantrae master plan calls for about 8,000 new homes in total.

Pelham also issued three new commercial building permits in 2012, which was up from one commercial permit in 2011.

The new cooling tower marks a $15 million investment by Colonial Pipeline, and will allow the company to increase capacity in the gasoline mainline running through Pelham, Colonial Pipeline Director of Communications Steve Baker said previously.

The cooling tower is scheduled to be completed in mid-2013, Baker said.

By EMILY BECKETT / Special to the Reporter  A two-vehicle wreck Saturday in Tallassee claimed the life of former Thompson... read more