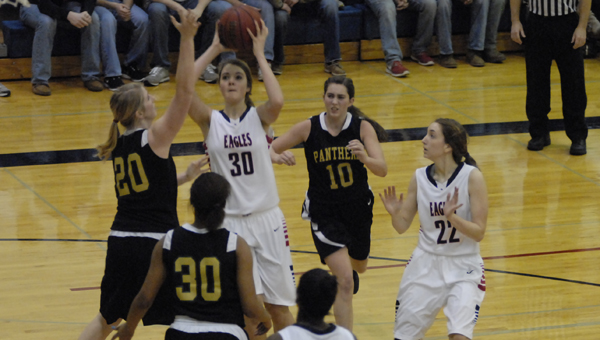 NORTH SHELBY – The Oak Mountain Lady Eagles trailed after the first quarter, but turned up the heat on defense en route to a 52-33 Class 6A, Area 8 victory over the Pelham Lady Panthers Jan. 8.

Pelham jumped out to a 11-9 lead after the first quarter of play, but went cold on offense in the next two quarters.

Oak Mountain held the Lady Panthers to just five points in each the second and third quarters. The Lady Eagles scored a game-high 16 points in the second to take a 25-16 lead at the half.

Christian Megowan and Mackenzie Garmany hit back-to-back 3-pointers to start the second half to take a 15-point lead, 31-16, midway through the third quarter. The Lady Eagles later went on a 7-0 run to take a 39-21 lead headed into the fourth.

Pelham responded in the final quarter of play with their best scoring output with 12 points, however Oak Mountain scored 13 points to take the 52-33 victory.