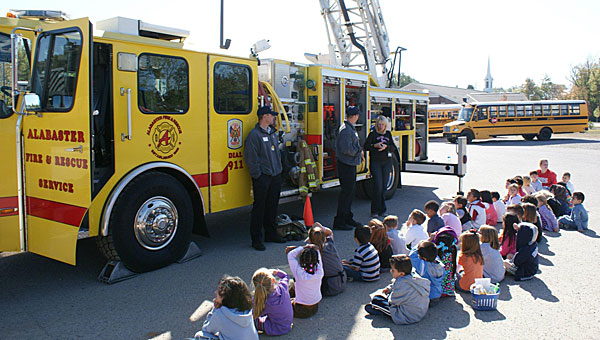 The Alabaster City Council voted during its Jan. 8 meeting to purchase a new fire truck and several pieces of equipment for the city's Public Works Department. (Contributed/Alabaster Fire Department)

The Alabaster City Council voted during its Jan. 8 meeting to borrow $1.3 million to purchase a new fire truck and several vehicles and pieces of equipment for the city’s Public Works Department.

The city will pay the loan back over the next five years, and the equipment purchased with the loan will have a useful life of 10-15 years, said Alabaster City Administrator George Henry.

The items being purchased for the Public Works Department total about $600,000, Henry said.

In other business, the council voted to reject the bids the city received for the Alabaster Newsletter, which is mailed to Alabaster residents each month. The council rejected the bids after none of them conformed to the bid requirements, and will now rebid the project.

According to city requirements, newsletter bidders must provide editorial content, design layout, photography, advertising and quality control at no cost to the city, must sort the newsletters to be mailed to Alabaster residents each month and must allow 55 percent space in the publication for city-related news and 45 percent space for advertising.

Advertising revenue is retained by the individual or company in charge of producing the newsletter, according to Alabaster guidelines.

Newsletter bidders must also be able to provide 250 hard copies and a digital copy of the newsletter to the city, and must provide about 16,000 hard copies to be mailed to residents.

FROM STAFF REPORTS The Shelby County Wildcats fought back from a 4-point halftime deficit to claim a 50-46 Class 5A,... read more