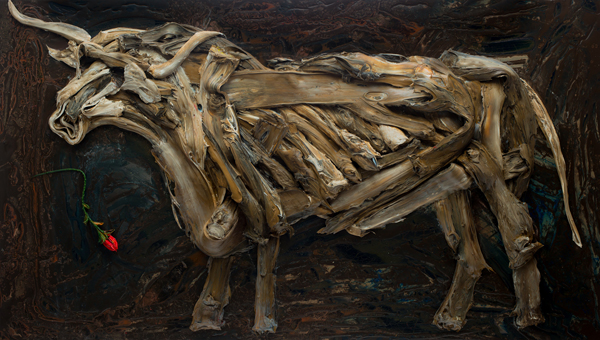 Justin Gaffrey’s work will be on exhibit at the SCAC during the month of January. (Contributed photo.)

The Shelby County Arts Council will host an exhibit of artist Justin Gaffrey’s work during the month of January.

“Sculpting with paint is how we like to describes Justin’s technique,” said Brian Wood, Gaffrey’s assistant.

Susan Dennis Gordon, SCAC director of arts and education, said she’s a fan of Gaffrey’s work, which she called “unique.”

“His work has a 3-D element,” she said. “Some of the artwork, the paint sticks 6 inches off the canvas.”

Gordon said the SCAC will display 18 of Gaffrey’s larger paintings, which feature birds, flowers and landscapes. The smallest painting is 30 inches by 40 inches.

Gordon said Gaffrey has a large following, and she is excited to display his work in Columbiana.

“It’s nice to have an artist with such a background,” she said.

Gordon said the idea for the exhibit was developed by Christy Milliken, a former SCAC volunteer who now works as the director of Justin Gaffrey Studio and Galleries.

Milliken said Gaffrey will participate in the Alabama Wildlife Center’s Wild About Chocolate event Feb. 9, and she wanted to find another place for him to exhibit in Birmingham in January. Millikan said she enjoyed working with Gordon at the SCAC and thought it would be a good place to host the exhibit.

“We just wanted to give back to the community in some way,” Millikan said. “I knew that would be a good fit, and I knew she would take care of Justin’s work, being an artist herself.”

Gaffrey’s work is for sale at galleries in Seaside, Fla. and Blue Mountain Beach, Fla., and it also will be available for purchase at the SCAC exhibit.

The exhibit will run Jan. 10-31. Gaffrey will attend an opening reception on Saturday, Jan. 19 from 2-4 p.m. at the SCAC, 104 Mildred Street, Columbiana. The reception is free and open to the public.

FROM STAFF REPORTS Local brides-to-be have the chance to plan their big day in one day at the Shelby Living... read more