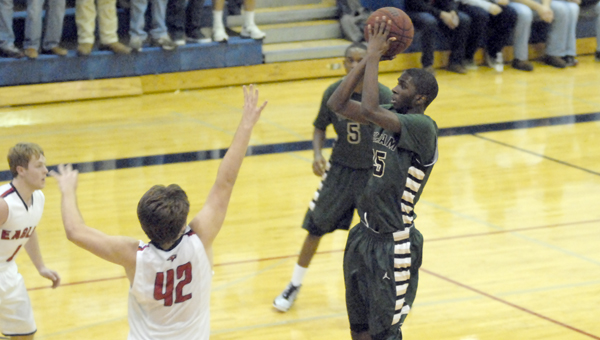 NORTH SHELBY – The Pelham Panthers opened Class 6A, Area 8 play with a 58-37 victory over the Oak Mountain Eagles Jan. 8.

“It’s very important to start off area the right way,” said Floyd. “This is the second season and we have talked about how important these next five games are now.”

“We pressured a little bit and got a few easy buckets,” said Floyd on the first quarter of play. “They fought back though and we knew they would.”

Oak Mountain opened the second half on a 7-2 run and a Jake Grundhoefer 3-pointer cut the deficit to eight, 41-33 with under a minute left in the third. Zach Morton extended the Panther lead to 10 and Willie Simpson hit a three at the buzzer to extend the Pelham lead to 46-33 headed into the fourth.

The Panthers pulled away in the final quarter when they outscored the Eagles 12-4 for the 58-37 victory.

Oak Mountain head coach Chris Love said that the Eagles will continue to improve throughout the remaining five area games to put themselves in position for a playoff berth.

“We are working to get better so that when we go play on February 8th in the area tournament we are playing as good as we can,” said Love.

Clark led Pelham with a game-high 18 points including eight in the second quarter. Simpson finished with 16 points while Morton scored 14 points.