Kingwood pulls away for victory over Edgewood 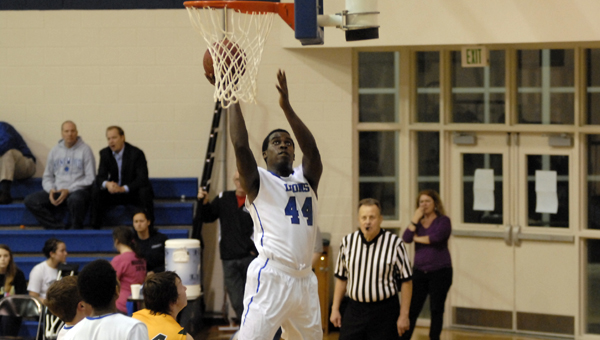 ALABASTER – The Kingwood Christian Lions pulled away in the second half for a 69-49 victory over the Edgewood Academy Wildcats Jan. 10.

The contest was intense and physical from the opening tip and reached its peak in the fourth quarter.

“We just had to weather the storm due to the fact that Edgewood is a solid team,” said Kingwood head coach Danny Davis. “They are a physical team, but we had to take care of the things we can control – layups, free throws and go to our strengths.”

Kingwood (14-1) trailed twice in the first quarter before battling back to take a 19-15 lead on a 6-2 run heading into the second quarter.

The Lions took a 28-22 lead after Gavin Sumrall hit a three from the top of the arch, but Wildcats answered back with a 5-0 run to cut the Kingwood lead to one, 28-27.

Kingwood went on a 10-2 run in the last two minutes of the half to take a 38-29 advantage into the half.

Titus Adams extended the Lions’ lead to 11 on a fast-break to start the third quarter but Edgewood’s Josh Cranolo led the Panthers on a 7-3 run to cut the score to nine midway through the third. Kingwood went on a 11-5 run in the last three minutes to take a 54-41 edge into the final quarter.

Adams scored back-to-back baskets to lead the Lions on a 6-0 run for a 19-point, 60-41, lead in the fourth. The intensity ramped up in the last five minutes when a Kingwood player was called for a technical foul and was shortly followed by a hard foul on Edgewood’s Bailey Hansen. Hansen was called for a foul on Daniel Fillingim as he drove to the basket.

“The emotions come from working so hard,” said Davis on the fourth quarter. “When you work hard, you are passionate about what you do. They love one another and they care about one another and it showed at the end when everyone pulled together.”

The Lions were able to maintain their composure to pull away for an 8-2 run for the 69-49 victory.

Kingwood Christian's Madelyn Pearce scored all eight of her points in the fourth quarter in the Lady Lions' 50-27 win... read more