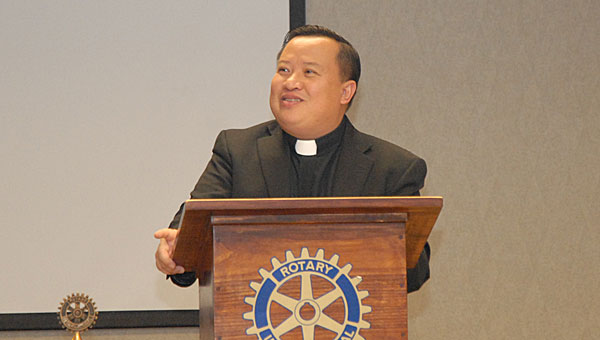 Father Douglas Vu, the assistant pastor at Our Lady of the Valley Catholic Church in North Shelby, speaks to the Alabaster-Pelham Rotary Club during a Jan. 10 lunch. (Reporter Photo/Neal Wagner)

When he was only 4 years old, Our Lady of the Valley Catholic Church Assistant Pastor Douglas Vu received a new appreciation for life on the last day of the Vietnam War.

Vu, a Vietnam native, was outside with his family when a stray bullet struck him in the head in 1975, he told members of the Alabaster-Pelham Rotary Club during a Jan. 10 lunch.

Because of the family’s isolated location, a doctor was forced to operate on Vu without anesthesia, but was able to remove the bullet and save Vu’s life.

“Because of that, life to me has always been a precious gift from God,” Vu said.

After the war ended, Vu worked on his family’s small farm in Vietnam, where he helped care for a constant stock of between 50-100 rabbits, which often served as the family’s source of meat.

Meanwhile, the family applied for permission to leave Vietnam and move to the United States as refugees – a request granted 20 years later in 1991.

“Life in a developing country like Vietnam is much different than it is here,” Vu said. “An average blue-collar worker there earns about $5 a day, and you may have four or five kids at home.”

After Vu’s family received permission from the Vietnamese and American governments to leave Vietnam, the Vus moved to a refugee camp where the family shared a small shack for six months. While at the refugee camp, Vu, then 20 years old, learned English and took lessons on American culture before his family moved to Mobile.

In Mobile, Vu graduated from Davidson High School after a few semesters – including one session of summer school – before enrolling at the University of St. Thomas in Minnesota. After college, Vu began a career at Northwestern Mutual, and dreamed of one day becoming the first Vietnamese-American CEO of a Fortune 500 company.

But Vu, who grew up Catholic, said God had different plans for him.

After he entered the ministry for several years, Vu was ordained as a priest by the Birmingham Catholic Diocese in 2012, the first Vietnamese-American to do so. Today, Vu regularly leads Homilies during services at Our Lady of the Valley in a city much different from his childhood home.

“I am blessed beyond blessed,” Vu said.