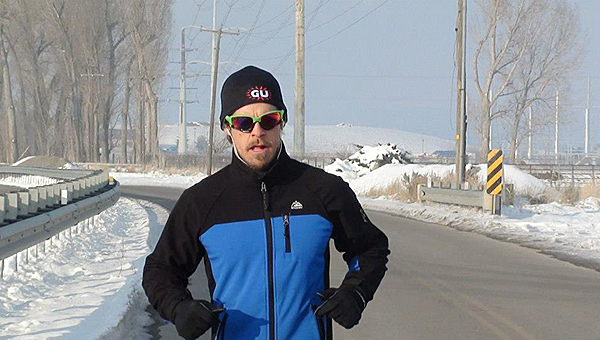 Helena native Landon Cooper is preparing to run across the country during a 150-day journey to raise money to battle cancer. (Contributed)

On Valentine’s Day, Helena native Landon Cooper will step off from the Golden Gate Bridge and won’t slow down until he reaches the other side of the country 150 days later.

Cooper, a longtime avid runner who currently lives in Utah, will run about 21 miles a day during the journey, which will end on July 13 in Ocean City, Md.

During the journey, Cooper will be looking to raise at least $100,000 for his organization, Miles 2 Give, which he founded in memory of his friend Ashley Davis, who died in 2009 at the age of 23 after battling Ewing’s sarcoma cancer.

Since Davis’ death, Cooper has been running marathons and ultra-marathons in her memory, but he said he recently started thinking about doing something more.

“I feel like this is my greater purpose,” said Cooper, noting the 3,000-mile journey will far surpass any distance he has run previously. “This is about creating opportunities for others.

“Spiritually, I’m probably the most sound I’ve ever been,” Cooper added. “I am running in her (Davis’) spirit.”

All money raised through the run will be donated to the Sarcoma Foundation of America. Cooper said he currently is working with sponsors to help cover the expenses of his cross-country tour.

Each day Cooper is on the road, he will run about 11 miles in the morning before stopping to visit schools, running gear stores and other locations to promote the tour. After each visit, Cooper will run about 10 more miles before resting and resuming the trip the next morning.

Traveling alongside Cooper in a recreational vehicle will be his tour director, Ryan Priest, and a videographer.

A few weeks before Cooper begins his journey, he will travel to Pelham to hold a fundraiser for the tour at Shelby’s on Shelby County 261. The fundraiser will begin at 4 p.m. on Thursday, Jan. 31, and will feature performances from bands such as OnLive, Within Reason, NashVegas and 90 Proof.

To learn more about Cooper’s trek across the nation, and the Miles 2 Give organization, visit Miles2give.org.