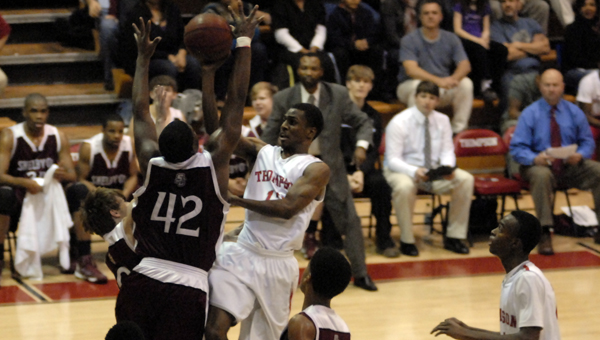 Shelby County's Tyler Madison leaps to block Marcus Lewis' shot in the first half of the Warriors' 73-58 victory over the Wildcats Jan. 11. (Reporter photo/Mickel Ponthieux)

ALABASTER – Shelby County’s top-ranked teams squared off for the third time this season and the Thompson Warriors rallied from a first-quarter deficit and fought off the Shelby County Wildcats’ fourth-quarter rally for a 73-58 victory Jan. 11.

The Warriors and the Wildcats are both ranked No. 5 by the Alabama Sports Writers Association.

“We obviously didn’t come out and defend very well in the beginning,” said Thompson head coach Patrick Davis. “We talked about that at the quarter (break) and held them to two in the second quarter.”

The Warriors (21-2) allowed one Wildcat field goal before shutting Shelby County down to take their first lead of the game. Thompson went on a 9-0 run to take a 24-22 lead with over four minutes remaining in the first half. The Warriors carried a 29-22 lead in at the half after a hitting 3-of-4 free throws in the final minute.

“The second quarter was tough on us,” said Shelby County head coach Torry Brown. “We didn’t get enough ball movement and get the ball inside as much as we wanted too.”

Shelby County battled back as close as five to start the second half and went on a 7-0 run midway through the third to pull within six, 39-33, with three minutes left in the quarter. The Wildcats’ Emmanuel Hall and Justus Martin hit back-to-back shots in the final two minutes to spark a 6-0 run to pull within five, 44-39. That would be as close as Shelby County could get in the third as DeAndre Gamble converted on a 3-point play for a 47-39 lead headed into the final quarter.

Tyler Madison came alive in the fourth to lead his Wildcats’ rally. Madison scored Shelby County’s first six points of the quarter while cutting the deficit to six.

That would be as close as the Wildcats would be able to get. Thompson went a perfect 6-for-6 from the free throw line in the final three minutes and closed the game on a 6-2 run to claim the 73-58 win.

“We talk about squashing runs,” said Davis. “Good teams are always going to go on runs when they are down. You have to rebound the ball on the defensive end and put the pressure on them.”

The win was the Thompson’s third against Shelby County this season.

Gamble led the Warriors with 20 points while Marcus Lewis finished with 19 points and was 8-for-8 from the free throw line. Caleb Johnson added 10 points for Thompson.

Madison led all scorers with 25 points for Shelby County. The Wildcats’ senior scored 12 of his points in the fourth quarter.