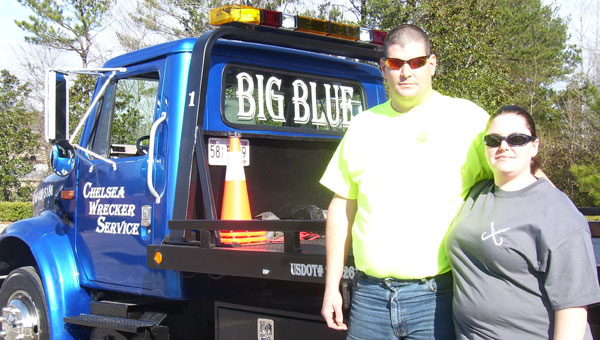 “The extra mile is never crowded,” reads the motto of the new wrecker service in Chelsea.

But they believe in going that extra mile, owner Robert “Robby” King, Jr. said. “We service all towing needs.”

They offer not only towing and winching, but lockouts, fuel delivery, tire changes (including roadside repair where possible), jump starts and secure storage while awaiting the owner or insurance agent.

As the only wrecker service located in the Chelsea main highway corridor, they can get to a stranded vehicle quickly so it won’t be stranded for an extended period, he said.

And Big Blue, their bright blue International roll-back truck, 10-ton wrecker or service vehicle is ready to come to your rescue 24-7.

King said he has worked in the towing business for 10 years.

Members of Kings family have long known service to the Chelsea community.

Several have served in the fire department, where Robby himself has served as a volunteer.

His brother Tommy King is currently fire marshall while his cousin Wayne Shirley is fire captain.

Melanie Ramos, King’s future wife and co-owner, works with him in the business. Having studied business management at Jefferson State Community College, she takes care of administrative duties, including managing the website and creating their informative brochure and business cards.

Their beautiful Big Blue, which was once an ugly white, beat-up flatbed is due to the creative genius of Pedro Chavez of Chavez Auto and Body in Saginaw, they said.

If you see their shiny Big Blue motoring around Chelsea, how about giving them a wave or a thumbs-up and let them know you saw their picture in the Shelby County Reporter.

Chelsea Wrecker Service is located at 9360 Old Highway 280, east of downtown. You can reach them at 438-5186, through their website Chelseawrecker.com or Facebook.

Walking on water requires getting out of the boat

Darlena and Paul Hnizdil, with sons Georgie and Patrick in their Hungarian apartment, where they lived for a required 30-day... read more