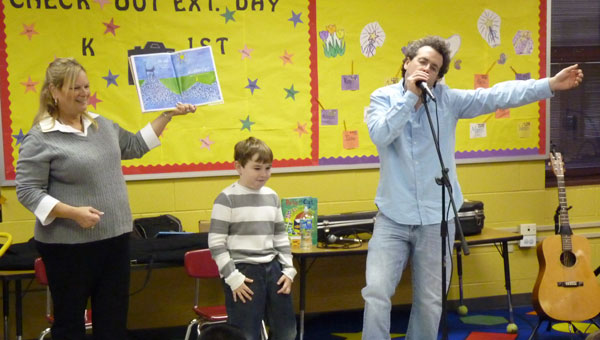 Litwin, the author of the “Pete the Cat” books, had just asked the adults in the classroom to “shake like you’ve had three and a half cups of coffee.” With a big grin, Litwin then asked the kids if they could beat the adults at shaking, and the kids happily obliged.

To bring the classroom back to order, Litwin then sang a song that included the lyrics, “I love it when you settle back down / put your bottom on the cold, hard ground.”

Litwin was at Greystone Jan. 14 as part of second grader Cole Richardson’s grand prize for winning the Scholastic Pete the Cat “Draw My Shoes!” contest. 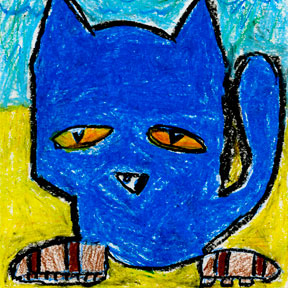 Cole Richardson entered this drawing into the Scholastic Pete the Cat "Draw My Shoes!" contest. It was one of two grand prize winnesrs. (Contributed)

Richardson also won “Pete the Cat” books for all of his classmates in Carol McLaughlin’s class, who all had their books signed by Litwin.

While at Greystone, Litwin shared excerpts from his new book, “Pete the Cat Saves Christmas.” He then took questions from the students.

One student asked how Litwin comes up with his stories.

“When I’m trying to be creative, I often do creative exercises. A creative exercise would be taking a character and putting him somewhere different,” said Litwin, who said that was how he came up with “Pete the Cat Saves Christmas.”

Litwin finished up his program by using song to tell the first and best-known Pete the Cat story, “Pete the Cat: I Love My White Shoes.”

“And the moral of this story is: No matter what you step in, keep walking along and singing your song because it’s all good,” Litwin said at the conclusion of the story.

After the program, Litwin said personally sharing his stories with children is important because of his background as an educator.

“There’s so much you learn when you read a book to a child that you just can’t get any other way,” he said.