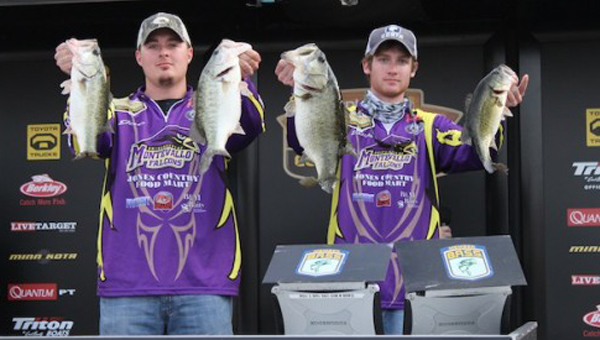 MONTEVALLO – One of the hottest sporting events in America currently is collegiate bass fishing, with recognized fishing organizations in more than 150 colleges and universities. While man has been catching fish for millennia, competition on the collegiate level is fairly new.

The University of Montevallo has fielded a fishing team since 2007, and that team has already built a winning reputation for itself. In its first season, the UM club competed in the National Collegiate Bass Fishing Championship on Lake Lewisville in Texas, posting the largest first-day catch and finishing 15th.

Success continues to follow the Falcons, and this season, the club finished 11th out of 80 boats in the Southern Regional Bass Anglers Sportsman Society (B.A.S.S.) Series, held at the Harris Chain of Lakes in Tavares, Fla., in early January. This qualifies the team to compete in the national championship B.A.S.S. tournament.

While teams at many larger schools with whom Montevallo competes have 30-50 anglers in their clubs, Montevallo’s current team has six members, but as the saying goes, “It’s the quality, not the quantity that counts.” These six young men have garnered the respect of their competitors and have represented the university in four collegiate fishing series including the Forrest L. Wood (FLW) Tour, the BoatUS Collegiate Bass Fishing Series, the Fishlife Collegiate Tour and the B.A.S.S. Tournament.

While catching fish is the measurable goal of the University of Montevallo Bass Anglers Association, according to their website, the purpose of the organization is “to unite men and women through the common bond of fishing; to educate anglers and develop angling skills; to strengthen student camaraderie/institutional esprit-de-corps; to promote sportsmanship through athletic competition and fellowship; to encourage good stewardship of our natural resources; and to develop and train students for local and regional events.”

For additional information on the University of Montevallo Bass Anglers Association, contact Joe Handley, president of the club, at jhandle1@forum.montevallo.edu.