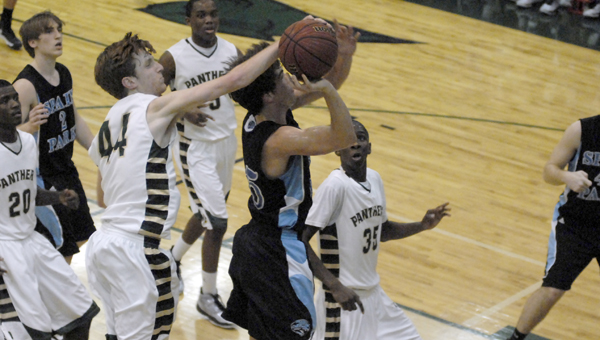 PELHAM – The Spain Park Jaguars erased a double-digit second half deficit, but the Pelham Panthers were able to fight off the Jaguars in the fourth quarter for a 47-45 Class 6A, Area 8 win Jan. 15.

“We had a great opportunity to win the game,” said Spain Park head coach Neal Barker. “They did everything we asked them to do, but just came up two points short.”

Pelham took a two-point lead in at the half and came out on a 6-0 run to begin the third quarter. Willie Simpson completed a 3-point play with over two minutes remaining to put the Panthers ahead 37-26.

Spain Park answered with stops on the defensive end of the floor and ended the quarter on a 5-0 run for a 37-31 Pelham advantage heading into the fourth. The Jags continued their momentum from the third with an 8-2 run to start the fourth to even the game 39-39.

“You always have to get stops,” said Barker. “Defense is even more important when you are behind and we were able to do it.”

Pelham’s Kenny Meadows answered the Spain Park run with a 3-pointer from the right corner to spark a 7-2 Panther run for a 46-41 lead with two minutes left in the game.

Drew Morgan converted on a 3-point play to bring Spain Park within two and Deion Wright hit 1-of-2 free throws with 20 seconds left for a 46-45 Pelham edge.

Pelham’s Justin Brooks extended the lead to two, 47-45, with nine seconds left but the Jags still had a chance to send the game into overtime. After a pair of timeouts, Spain Park quickly worked the ball up the court for a layup attempt that didn’t fall into the basket. The Jags had two put-backs off rebounds and neither fell as the Panthers claimed the 47-45 area victory.

Simpson and Dakota Clark led the Panthers with 14 points apiece.

Morgan and Wright led Spain Park with 10 points each.