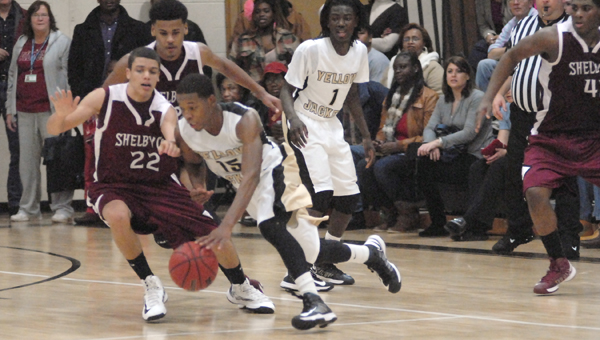 Vincent's Anterio Rogers drives to the basket past Shelby County's Cedric Youngblood in the fourth quarter of the Yellow Jackets' 68-65 loss to the Wildcats Jan. 18. (Reporter photo/Mickel Ponthieux)

VINCENT – For the second time in seven days, the Shelby County Wildcats found themselves in a battle of top-10 teams when they traveled to take on the Vincent Yellow Jackets.

“It’s always a really tough game when we play Vincent,” said Shelby County head coach Torry Brown. “Vincent played good defense and was really pressuring the ball.You have to give them credit, but you have to give our kids credit too. They stuck with it and battled to come out with a win.”

Vincent (17-5, 6-0) trailed 36-24 at halftime after a poor shooting performance in the first half. The Yellow Jackets, however, found their rhythm in the second half.

Tyler Williams led the Yellow Jackets on a 12-5 run to close the third quarter while holding Shelby County (19-5, 5-0) without a field goal for a 48-43 Wildcats’ lead heading into the fourth.

Jamal McCrimon opened the fourth with a three that sparked a 9-0 Vincent run for a 52-48 Yellow Jacket lead early in the quarter.

Anterio Rogers brought Vincent within one, and after Shelby County’s second field goal of the quarter, McCrimon tied the game 61-61 with two minutes left.

“We extended our pressure and we made them feel uncomfortable,” said Vincent head coach John Hadder on the second half. “You have to give them credit. They made some big shots when they needed to.”

Shelby County quickly regained the lead on a 7-1 run capped by a Justus Martin 3-pointer from the left corner for a 68-62 advantage.

Vincent added three points in the last 24 seconds and had a chance to send the game into overtime. McCrimon rebounded a missed free throw and the Yellow Jackets worked the ball quickly down the floor. Rogers had a look at the basket from beyond the arch, but the shot didn’t fall as time expired to give Shelby County the 68-65 win.

Shelby County Tyler Madison led all scorers with 27 points. Madison scored 22 of his points in the first half and was 6-for-8 from the line in the second half. Brandon McKinney added 19 points and Emmanuel Hall had 12 points. Martin finished with 10 points.