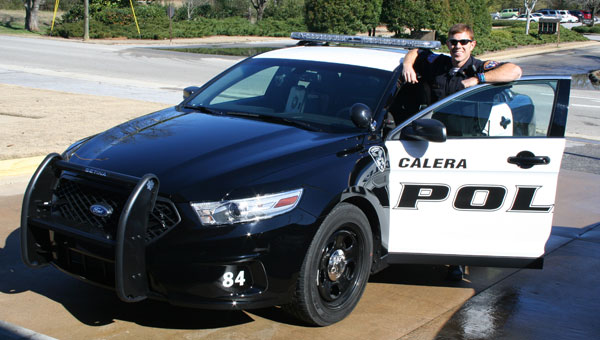 CALERA – After getting behind the wheel of a Ford police interceptor, Calera Police Chief Sean Lemley knew his search for the best patrol cars had ended.

The Calera Police Department, with the approval of Mayor Jon Graham and the City Council, recently purchased seven 2013 police interceptor sedans for patrol officers and four utility vehicles for detectives. The cars are “absolutely night and day” when compared to the 2010 Ford Crown Victorias, which were the newest cars in the department’s fleet.

The all-wheel-drive interceptors sport six-cylinder engines with superchargers, which run “more efficiently” than the Crown Victorias’ eight-cylinder engines, Lemley said. The sedans have a Ford Taurus body, and the utility vehicles have the body of a Ford Explorer, but the similarities to the civilian vehicle models stop there.

“They have beefed up suspension and cooling system, and they handle better than the vast majority of sports cars out there,” Lemley said. “Ford has been working on this thing for years. In my opinion, it’s far superior and it far exceeded my expectations.”

The department outfitted its first interceptor Jan. 16, and Lemley plans to release the rest in the coming weeks.

“Safety is a big thing. If we get hit form behind, there are steel bars in the back. The Crown Vic didn’t have much protection,” Officer James Fuller said.

“They’re far superior to the Crown Vic,” Lemley said. “It’s not a civilian car that they try to make into a police car. It’s obvious it’s a police car.”

Lemley worked with Stivers Ford in Montgomery for the vehicles. The City Council approved funding for 10 new vehicles. The dealership paid $2,400 trade-in for each older police car and worked with the police department to provide an additional vehicle with “no additional cost to tax payers,” Lemley said.

The department replaces a third of the vehicle fleet every three years, thereby assuring no car has been used for more than nine years. The rotation insures low maintenance on the cars, which saves the city money. Lemley said the maintenance cost on the new cars would be significantly less than previous years.

The new vehicles were assigned to officers with seniority, thus “rewarding longevity in the department,” Lemley said.

“We replaced the cars with the very best you can get, in my humble opinion. I’m just floored,” Lemley said.

Vincent's Anterio Rogers drives to the basket past Shelby County's Cedric Youngblood in the fourth quarter of the Yellow Jackets'... read more