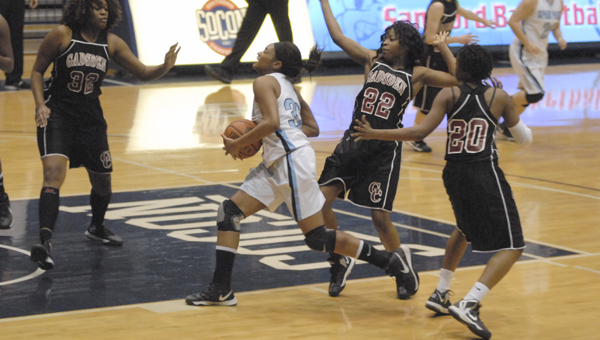 BIRMINGHAM – The Spain Park Lady Jags went on a late run to defeat Gadsden City 49-43 in the first game of the MLK Shootout at Samford University’s Pete Hanna Center Jan. 21.

Gadsden City extended its lead to 37-33 early in the fourth before Spain Park’s Victoria Baldwin led the Lady Jags back to take the lead. Baldwin went on a 7-0 run capped by a pair of 3-pointers to give the Lady Jags a 40-37 lead with under four minutes remaining in the game.

The lead exchanged hands twice in the next two minutes before Spain Park closed the game on a 9-2 run in the last two minutes to claim the 49-43 victory.

Baldwin finished the game with a game-high 26 points, including four three’s and a 10-for-13 performance from the free throw line. Ashley Gaston added 11 points with three 3-pointers.

FROM STAFF REPORTS MONTEVALLO – University of Montevallo sophomore Troran Brown scored a career-high 30 points as he led the... read more