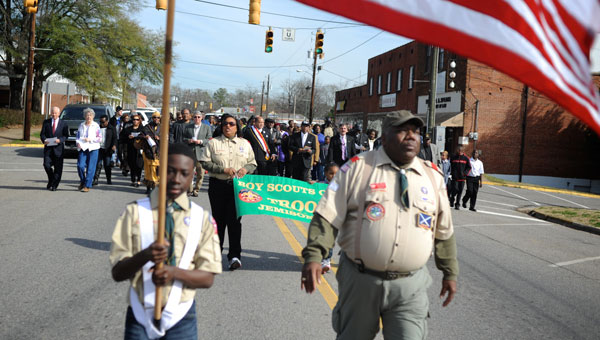 Longtime Montevallo resident Dr. Earl Cunningham said pulling the event together has been an “uphill struggle” since he and former Mayor Ben McCrory began the tradition nine years ago.

Jones recalled returning home after serving in the U.S. Army, and when he registered to vote in Columbiana, he faced a poll tax and literacy test. He also spoke of a time when black citizens could only bag groceries and sweep the floors at local grocery stores, rather than man the registers.

“All we wanted was fairness,” he said. “That’s all we were asking for – fairness. Montevallo has come a long way, but still has a long way to go.”

Dr. Michael Reese, the guest speaker, said the event was to “honor a mortal man with an immortal dream.”

“When we march, we inspire, and we raise hopes to new levels,” Reese said. “Are we celebrating with a monument rather than a movement? Would Dr. King be proud of what we’ve accomplished in America?”

Before announcing Montevallo High PE teacher Bobby Pierson as the parade’s grand marshal, Dukes distinguished between a parade and a march.

“Let’s not make this a parade,” Pierson said. “Let’s make it a march.”