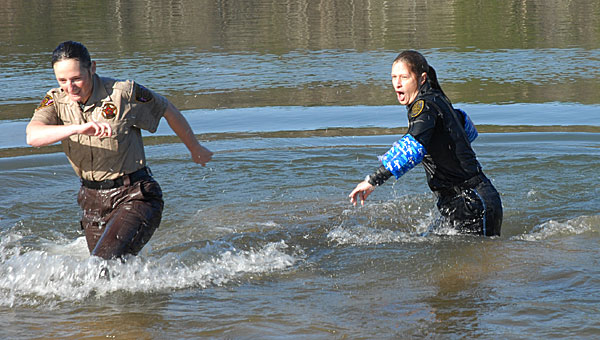 Three local police officers braved outdoor temperatures hovering in the high 30s on Jan. 19 as they took a plunge in the Oak Mountain State Park lake to help spread the word about the upcoming Polar Plunge event.

Pelham police officer Debbie Sumrall, Birmingham police officer Lynda Woods and Shelby County Sheriff’s Office deputy Shelby O’Connor spent the morning at the state park’s beach testing the waters for the Polar Plunge, which will be held on the beach on Jan. 26.

The officers, dressed in their respective uniforms and wearing a few “non-issued attachments” such as floatation rings, said they took the plunge in an effort to draw more participants to the Jan. 26 event.

“It’s going to be freezing, but it’s for a good cause,” Sumrall said shortly before sprinting into the water.

Before the three officers entered the water, state park Ranger Brian Wallis used his diving watch to determine the water was about 49 degrees.

After taking the dip, the officers quickly dried off and rushed to the park office to change into dry clothes.

The beach will be filled with similar shivering swimmers during the Jan. 26 Polar Plunge. Registration for the plunge will begin at 7:30 a.m., the Polar Bear Challenge – an obstacle-filled run featuring 10 obstacles – will begin at 9 a.m. and the plunge into the chilly lake will begin at 10 a.m.

This year will mark the third straight for the Polar Plunge in Pelham, which is sponsored by the Law Enforcement Torch Run organization and raises money for Special Olympics Alabama.