She almost laughed at God 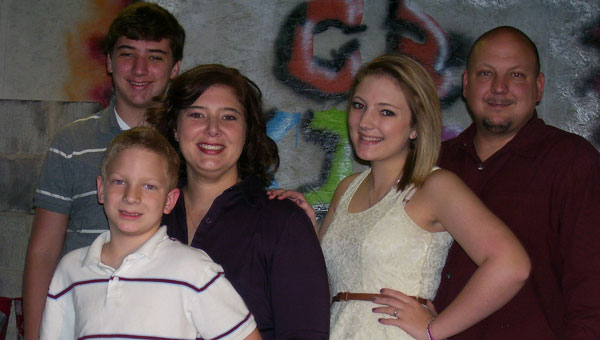 Joni Matherne, children’s pastor at Chelsea Community Church, with her family as they prepare for service on a Sunday morning. Husband Garrett and their children, Jessica, 17, and Matthew, 14, help out in the 80-member Children’s Ministry, along with several other young people and adults. Jacob, almost 8, is a member of the children’s group. (Contributed)

Joni Matherne sat, stunned, beside her husband Garrett in a Sunday morning service at the Church of Brook Hills. There was no way she could do what the Lord seemed to be asking her to do. She almost laughed aloud.

But God was to have the last laugh, just as he had had the last word the previous Sunday. She’d tried to argue with him then, too, until God pointed her to a verse in the passage the minister was reading in Philippians, Chapter Two. She stopped arguing then and did what God was asking her to do.

But what he was talking about now made her want to burst out laughing. “I can’t be a children’s minister,” she argued, “I’m a girl, and uneducated.”

Then, the next month, January 2007, she met the Brook Hills children’s minister — a woman!

Recalling Philippians 2:14: “Do everything without complaining or arguing” (NIV), she began volunteering in children’s ministry. That summer she became children’s ministry assistant at Brook Hills, and learned the church wanted to help finance her attendance at seminary.

While attending New Orleans Theological Seminary Extension Center in Birmingham, she had hands-on training at Brook Hills by what she calls “one of the most amazing children’s ministers in the world.” She allowed Joni to lead meetings, Sunday morning services, back yard Bible clubs, and even a mission trip.

It was these four years that prepared her for her position as children’s pastor at Chelsea Community Church, she said, where she now invests in the lives of a new and growing group of kids. When she came to CCC in June 2011, the children’s ministry ran about 25 to 30 children. Today it runs around 80.

This past December, Matherne received her associates degree in Christian ministry.

God has finally proven to her, she said, that she is to be a children’s pastor. And she happily accepts the call.

Pastor Joni and husband Garrett have three children, but she also feels like the kids at CCC are hers, too, she said.