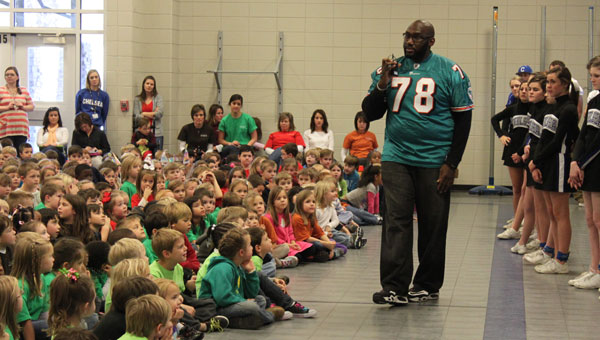 “A vision is something that starts inside,” James told the hundreds of kids. “I had to do what it took to get in the NFL, and it started with working hard.”

James visited Chelsea Park as part of the Fuel Up for 60 Minutes initiative, through which the NFL encourages kids to be active for an hour a day.

“We’re asking you to sign a student ambassador draft,” Stewart told the students. “You’d be saying, ‘Yes, I promise I will do 60 minutes a day and eat healthy foods.'”

Stewart then cranked up “Oppa Gangnam Style,” a song by the artist PSY, to get the kids moving.

“Put your hand on your heart,” Stewart said. “Is your heart beating faster? That is exercise.”

“I like to play. As old as I am, I like to play, to exercise and eat the right foods because I want to be healthy too,” Shelby County Superintendent Randy Fuller said.

James began his career at Auburn University, and then was drafted to the Carolina Panthers. He finished his career with the Miami Dolphins before retiring in 2007.

“The time is now to start eating healthy and working hard,” James said. “I started when I was your age, and it started with a dream and hard work.”