Pelham pulls away for win over Chelsea 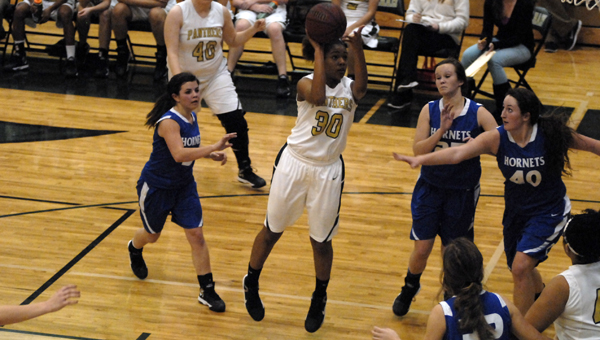 Pelham's Zarria Morgan shoots for two of her eight points in their 40-30 area win over Chelsea Jan. 22. (Reporter photo/Mickel Ponthieux)

PELHAM – The Pelham Panthers girls’ basketball team held the Chelsea Hornets to just one point in the second quarter en route to a 40-30 Class 6A, Area 8 victory Jan. 22.

Chelsea took a 10-7 lead after the first quarter of play. Pelham caused 10 Hornet turnovers in the second quarter to outscore Chelsea 11-1 to take an 18-11 lead at halftime.

The Hornets cut into the Pelham lead early in the third when they opened the second half on a 7-0 run to even the score at 18 with less than five minutes left in the quarter.

Pelham regained the lead on a pair of second chance baskets to spark an 11-3 run to end the third for a 30-21 advantage.

The Panthers went on an 8-3 run to start the fourth to take their largest lead of the game with a 38-23 score with more than three minutes left in the game.

Chelsea fought back with a quick 6-0 run to cut the deficit to single digits, but it wasn’t enough as Emily Jackson sealed the 40-30 win with a pair of free throws.

Jackson and Erykah Hall led Pelham with nine points each.