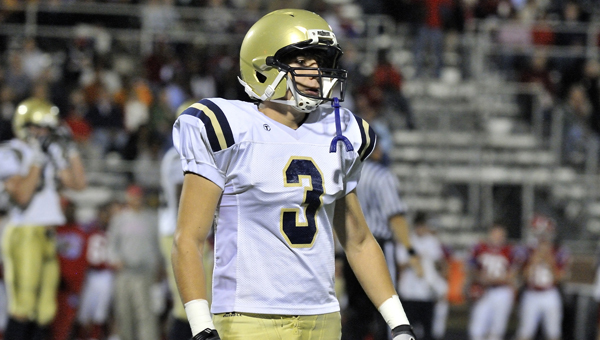 Briarwood Christian senior defensive back Will Dyson has committed to play football for Washington and Lee University in Lexington, Va. (Contributed)

NORTH SHELBY – Briarwood Christian senior Will Dyson has committed to play football at Washington and Lee University in Lexington, Va.

Washington and Lee University is a NCAA Division III institution that competes in the Old Dominion Athletic Conference. Washington and Lee, founded in 1749, only offers academic scholarships but still excels in athletics. The Generals won their ninth ODAC conference championship in 2012.

Dyson was invited to a Washington and Lee camp where he learned more about the school and the Generals’ program.

“After beating Jackson and Vigor in the first and second round of this year’s high school playoffs, then falling to St. Pauls in the 5A quarterfinals, I was certain that I wanted to keep playing football after high school,” said Dyson on wanting to continue his football career. “College football at Washington and Lee is a fantastic opportunity to compete for a championship and to attend one of the best schools in the country.”

Dyson remained in contact with Vince Munch, who recruits the Deep South, after the summer camp. Even though Centre College, Sewannee, Birmingham Southern and Milsaps College gave Dyson interest, relationships with the coaching staff at Washington and Lee cemented his commitment to the Generals.

“It was a fun process, but making a decision about where to spend my next four years was stressful,” Dyson said.

Washington and Lee’s excellence on the field and in the classroom was a big factor in Dyson’s decision to play for the Generals.

“I want to study business and obtain a great education at a small, out-of-state school with the right balance between academics and varsity athletics,” said Dyson. “Washington and Lee is one of the best schools in the nation with 24 varsity sports. (They) produce a lot of champions, and a lot of academic All-Americans.”

Dyson said that playing football at Briarwood has prepared him on and off the football field.

“(Briarwood coaches) know the game of football, and they work hard all year to prepare us,” said Dyson. “I could not have asked for a more qualified group of coaches to prepare me for football at the next level, or for life in general.”