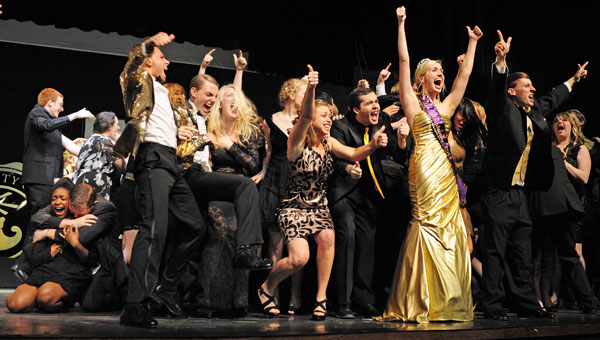 The Gold Team celebrates after winning College Night following the final show on Feb. 11, 2012 at Palmer Auditorium at the University of Montevallo. (Reporter Photo/Jon Goering)

MONTEVALLO – The University of Montevallo campus will be bustling with activity during Homecoming 2013.

This past weekend saw athletic face-offs with women’s volleyball. Men’s soccer and men and women’s basketball will continue throughout the week.

In terms of College Night, the oldest tradition at UM, the Purple and Gold side signs were raised last week, which “hint” at the productions.

“The productions are secret until Wednesday night. They’re not always very clear until you see the show,” said Dr. Kelly Wacker, associate art professor and chair of college activity. 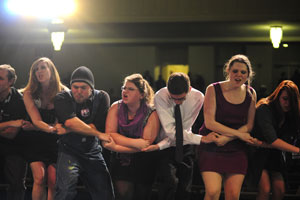 On the stage following their College Night 2012 loss, the Purple Side joins hands to perform its chant one last time before the evening’s end. (Reporter Photo/Jon Goering)

“There’s always a new, all-original production and a new set of leaders,” Wacker said. “It’s a learning curve for everybody. They’re doing things they’ve never done before. That’s part of the excitement of it. It’s a time period when there’s a lot going on and a lot of excitement and energy.”

“I get to see a lot of behind-the-scenes stuff. Most people just see the show. I get to see how they teach each other and live the experience. That to me is really exciting. They get tired and frustrated, but they’re really jubilant and excited when it comes together,” Wacker said, noting she is a part of the Green, or neutral, side.