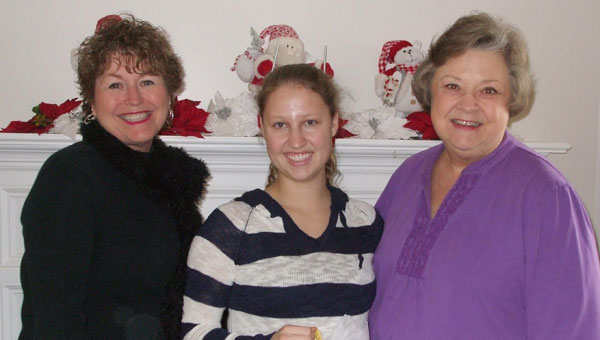 Alisha Broderick graduated from Shelby County High School in 2008, a bright, personable young woman who was an honor student and salutatorian of her class.

As she was deciding what to do for her future, College Counselor Donna Morris planted a seed of service to her country. Through hard work and her exceptional resume´, Broderick earned a full ROTC scholarship to Auburn University and graduated in 2012.

Broderick, daughter of Penny and Cranford Blackmon of Wilsonville, has four younger siblings. Her brother has followed her footsteps and is on a ROTC scholarship to Auburn now. Today 2nd Lt. Alisha Broderick is airborne qualified in military intelligence with the U.S. Army. She is stationed in Ft. Campbell, Ky., with the 101st Aviation Brigade.

Morris is a member of the DAR David Lindsay Chapter of Shelby County. The chapter has a long history of supporting veterans and active military. This past Christmas, the chapter sent 125 boxes to the Alabama Army National Guard 167th Infantry Battalion Company B on active duty in Afghanistan. This year, the chapter decided to “adopt” a female Shelby County active military person. Morris told the chapter about Broderick.

When Broderick was home for leave, Regent Margaret Clark and Morris visited Broderick and gave her a generous gift card to buy herself a treat.

“On behalf of the David Lindsay Chapter of the Daughters of the American Revolution, we are happy to give you this token of our appreciation for what you are doing, and will do in the future, for our country,” said Clark in her letter to Broderick. “Your many accomplishments make us proud and we want you to know that you take the thoughts and prayers of all of us and many others, with you every day. You are certainly a wonderful role model and we are proud to have you represent our community.”

Broderick was so appreciative of her gift and interested in learning about the DAR, its work to support the military and the scholarships that the organization gives.

Godspeed, Alisha. Thank you for your service to keep our nation safe.