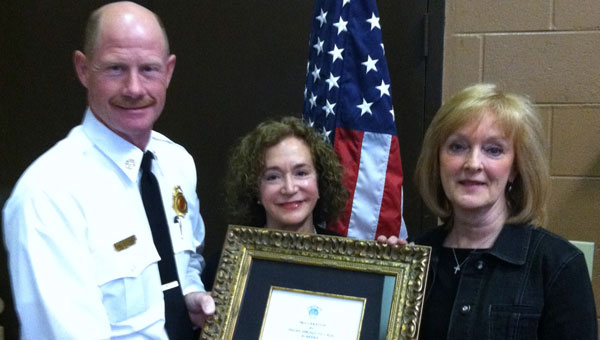 Legendary firefighter and paramedic R. Michael O’Connor was Indian Springs’ fire chief for 16 years until his unexpected death a year ago.

Under his leadership, our fire department became a state-of-the-art example of technological and professional excellence. Beginning as a firefighter and ending as fire chief, Michael O’Connor served area citizens with extraordinary dedication and remarkable service for 30 years.

On Jan. 17, Indian Springs Village, the North Shelby County Fire and Emergency Medical District, and fire chiefs of many nearby cities came together to honor Chief O’Connor. More than 60 people braved icy weather and falling snow to gather inside Fire Station No. 2 for a very special ceremony.

Current Fire Chief Buddy Tyler welcomed the crowd and recapped the career of his former boss.

“We are very honored to dedicate this station to Chief O’Connor today,” said Chief Tyler. “This fire station is a living legacy to his accomplishments.”

Then, Chief Tyler introduced the former chief’s wife, Nelle O’Connor, as the guest of honor.

“Indian Springs is honored to participate in dedicating Fire Station Number 2 to Chief O’Connor, who served with such extraordinary dedication,” Guercio said.

“Thank you for honoring Michael in this way,” Nelle O’Connor said.

Concerning her husband’s dedication to the firefighters, she said, “He loved North Shelby Fire Department, and he loved each one of these men.”

Two memorials formalize the naming of Station No. 2 for former Chief O’Connor. Outdoors, a sign naming him hangs beneath the fire station’s street sign. Inside the station, a large frame surrounds a photo of Chief O’Connor in uniform. Beneath the photo is an inscription naming Fire Station No. 2 in his honor.

How do you pull a tiger’s teeth?