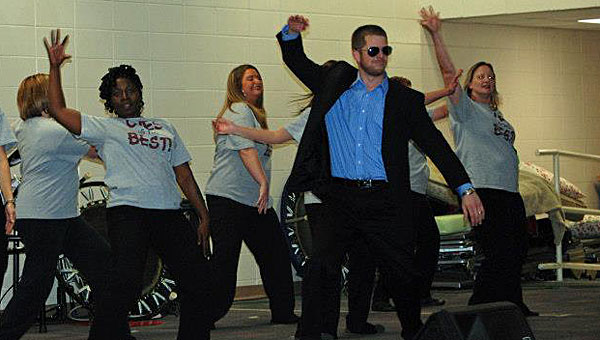 Creek View Elementary School teachers and administrators performed everything from a dance to the popular “Gangnam Style” song to a xylophone rendition of “Twinkle Twinkle Little Star” during the school’s second-annual faculty talent show.

The show, which was held in the school’s auditorium on Jan. 22, drew a standing room-only crowd, and featured school faculty members showing off their musical and dancing talents.

After teacher Chase Holden and computer lab aide Marsha Roach kicked off the event by portraying news reporters for the Creek View News Network show, the Just Dance kindergarten group performed to a song by the group “One Direction.”

Assistant principals Mandy Wesson and Holly Jackson then entered the stage to perform “Twinkle Twinkle Little Star” on the xylophones as the children in the audience sang along.

Teachers then performed a “comical dramatic interpretation” of “Goldilocks and the Three Bears” before teachers Misty Grillo and Heather Lawley sang a song dedicated to mothers.

The school’s first-grade teachers donned the group name “The First Grade Syncables” and took the stage to the Olympic Fanfare song before simulating an Olympic synchronized swimming routine.

After the second-grade teachers used costumes and props to showcase what jobs they would have if they were not teachers, about 15 teachers marked the grand finale by performing the “Evolution of Dance.”