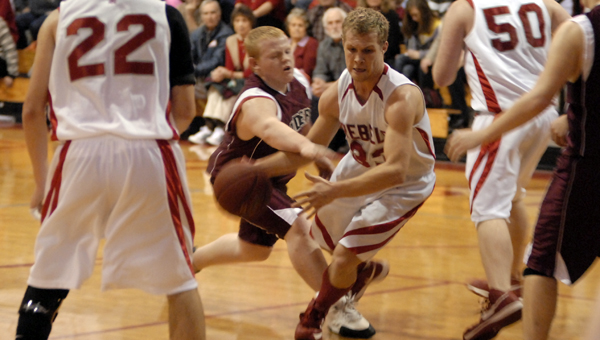 Coosa Valley's Alex Nelson drives the lane for two of his 10 points in the Rebels' 59-47 win over SMCA Jan. 28. (Reporter photo/Mickel Ponthieux)

HARPERSVILLE – The Coosa Valley Rebels made a run to distance themselves in the fourth quarter to seal a 59-47 win over the South Montgomery County Academy Raiders Jan. 28.

The Rebels scored 16 points in the second quarter to take a 24-20 halftime lead after trailing 9-8 after the first.

The Rebels used defensive rebounds into points to break on an 11-2 run to take a 48-34 lead. SMCA made a short 5-0 run, but Coosa Valley was able to answer the Raiders’ baskets the rest of the game to claim the 59-47 win.

Hicks and Chase Sanders led all scorers with 20 points each for the Raiders.