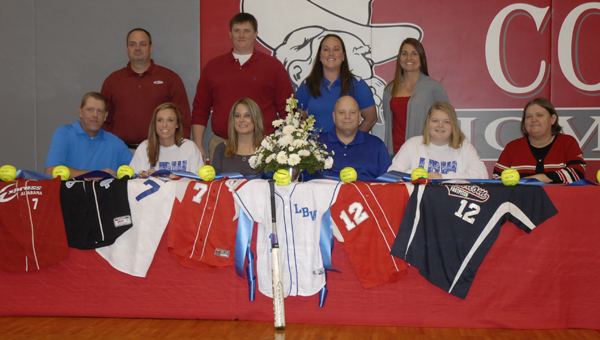 “It’s what I wanted to do my whole life,” Shaw said on signing with LBW.

Shaw and Sprayberry each signed in front of their classmates at Coosa Valley Academy. Before the two seniors signed, CVA athletic director Alton Hudson addressed the students and said signing to play at the next level “is what you work for.”

Shaw and Sprayberry led the Lady Rebels to a state runner-up trophy in 2012 after working through seasons where there wasn’t much success.

“It was hard when I first came here,” said Sprayberry. “We were considered an easy team to beat. Last year, we gave everybody a run for their money. We worked through it and got second in the state.”

Both Shaw and Sprayberry feel that LBW is a good fit for them.

“I will fit in really good,” said Sprayberry. “The girls welcomed me with open arms once I stepped on the field.”

“When I went there, I noticed that the softball program is really good,” Shaw said on LBW. “We toured the school, and it was really nice.”