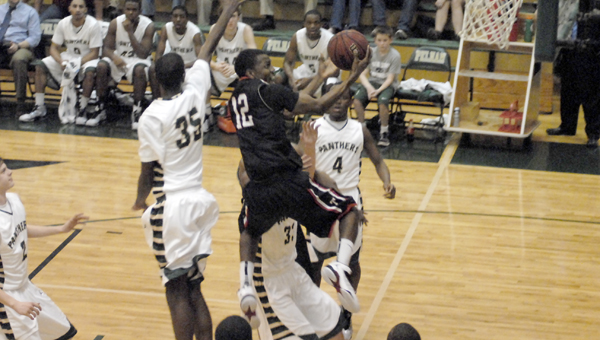 Thompson's Marcus Lewis soars to the basket for two of his game-high 15 points in the Warriors' 53-41 win at Pelham Jan. 29. (Reporter photo/Mickel Ponthieux)

PELHAM – The Pelham Panthers rallied to take the lead twice in the third quarter, but the Thompson Warriors closed the door in the fourth to secure a 53-41 victory Jan. 29.

“It’s always an unbelievable atmosphere when these two teams get together,” said Thompson head coach Patrick Davis. “I thought we did enough to win the game. I thought we defended well and did a good job at not giving up any easy (baskets).”

Thompson (24-3) held the Panthers to just six points in the second quarter to take a 22-17 lead at the half.

Kenny Meadows capped a 9-3 run with a 3-pointer to give Pelham a 26-25 lead midway through the third quarter. After a pair of Warrior free throws, Dakota Clark regained a 28-27 lead for the Panthers with under two minutes left in the quarter.

Duke Thomas and DeAndre Gambe combined to lead Thompson on a 9-0 run to end the third for a 36-28 Warrior lead into the fourth.

“We made a nice little run and they answered it to end the quarter,” said Pelham head coach Joel Floyd.

The Warriors led as much as 11 early in the fourth, but the Panthers were able to cut the deficit to four, 43-39, with less than three minutes remaining. Thompson pulled away on a 10-2 run to seal the 53-41 victory.

Thompson’s Marcus Lewis led the Warriors with 15 points, including 6-for-7 from the free throw line in the fourth. Gamble scored 12 points and Thomas finished with 11 points.