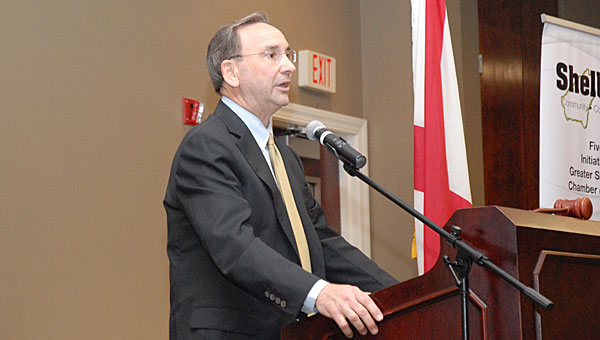 William J. Canary Jr., the president and CEO of the Business Council of Alabama and former assistant to President George H.W. Bush, speaks to the Greater Shelby Chamber of Commerce during a Jan. 30 luncheon at the Pelham Civic Complex. (Reporter Photo/Neal Wagner)

A former assistant to President George H.W. Bush praised the Greater Shelby Chamber of Commerce, and spoke in favor of pre-kindergarten education programs during a Jan. 30 GSCC luncheon at the Pelham Civic Complex.

The lunch, which also served as the Chamber’s annual meeting, featured William J. Canary Jr., who currently is the president and chief executive officer of the Business Council of Alabama.

Before coming to Alabama, Canary, a New York native, was appointed to serve as Bush’s special assistant for intergovernmental affairs, and later was named the chief of staff for the Republican National Committee.

During the GSCC lunch, Canary said there are 61,923 4-year-old children in Alabama, and said pre-kindergarten programs help prepare those children to be successful in school.

“If you bring in a child (to kindergarten) that’s ready to learn, they are going to be able to read at third grade,” Canary said, noting pre-kindergarten programs also could help cut down on the nation’s 40-percent high school dropout rate. “If we don’t work to save them and help them, who will?”

Canary said the BCA works to partner the state’s businesses with the education system in an effort to better the state’s workforce and revenues.

“Every time we bring unemployment down 1 percent, that puts 22,000 people back to work,” Canary said. “The state’s revenue is directly proportionate to people going back to work and dropping unemployment. One thing we have tried to champion is a business and education alliance.”

Canary also called chamber members “heroes,” and said the BCA works with 124 chambers of commerce across the state.

“Your voice is so significant,” Canary told the about 200 in attendance at the luncheon. “If we could get all the chambers to come together, we would have the loudest voice.

“I thank God for what you do for your communities, and for what we all do for this great state,” Canary added.