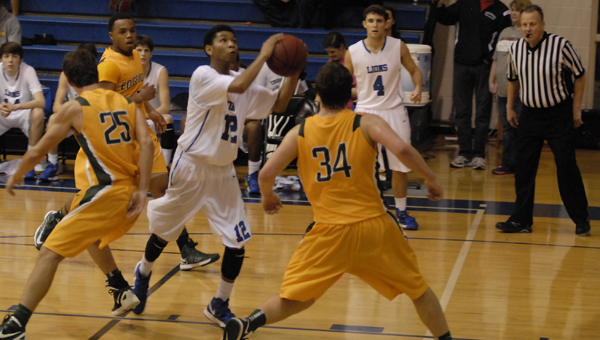 Kingwood Christian's Silas Edwards drives to the basket in a recent game for the Lions. Kingwood Christian is ranked No. 3 in the AISA selected by the Alabama Sports Writers Association. (Reporter photo/Mickel Ponthieux)

The Kingwood Christian Lions boys’ basketball team has been rolling past the competition after falling in its first game of the season at Glenwood.

The Lions are 20-1 on the season and currently ranked No. 3 in the Alabama Independent School Association. In Kingwood’s 20 wins, four have come to teams ranked in the top-10 with an average margin of victory of 15 points.

“We lost the first game, but have pulled things together,” said Kingwood head coach Danny Davis. “We have played some decent teams. We have been progressing and have been running two units.”

As the Lions have accumulated the victories, the support has continued to grow. Kingwood Christian teachers and students have backed their Lions, which has lead to bigger crowds at home games and bigger gates.

“Economically it’s been good by bringing money in,” he added.

The Lions’ success hasn’t been limited to the basketball court. Every player on the Kingwood boys’ basketball roster has made the grades in the classroom to stay on the active roster.

Kingwood Christian requires that students maintain a grade of 70 on their report cards, but Davis’ standard is that his players must maintain a 75 to remain eligible to play. If players’ aren’t able to keep their grades up, they are placed on probation.

As the Lions’ continue their stellar season, Davis said the he hopes that his team can attract more notice from prospective students to the school.

“It’s definitely a great school academically, and we are trying to raise the level of athletics to meet the academics,” he said.

Thompson's Marcus Lewis soars to the basket for two of his game-high 15 points in the Warriors' 53-41 win at... read more