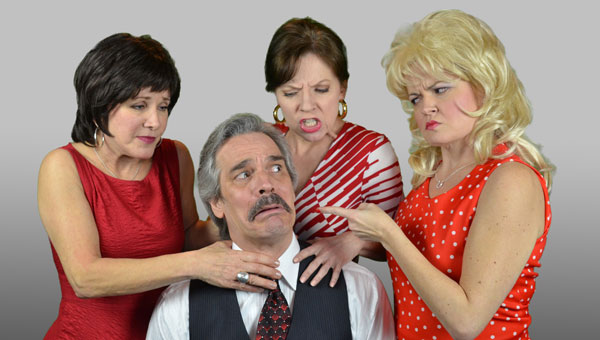 MONTEVALLO – A “celebrity” walks the halls of Montevallo Elementary School these days, according to MES Principal Dr. Allison Campbell.

MES music teacher Julia Hixson teaches elementary-age children to sing during the day, then dons polyester and becomes Roz Keith, a woman hopelessly in love with her boss, during a “9 to 5” production at the Virginia Samford Theatre in Birmingham.

The musical, which is a “fun, fluffy, frivolous night,” according to Hixson, originally was made famous by Dolly Parton and Jane Fonda in the 1980 film “Nine to Five.”

Hixson auditioned for the role, a role that director Norton Dill called his “favorite,” and got a call back for the part.

With an interest in supporting the arts, Hixson has been involved with local theater since 1995 when she joined the Birmingham Summerfest. Her resume contains a list of everything from “The King and I” to “Gypsy” to “Guys and Dolls.”

“When I get out there and perform, I feel comfortable,” Hixson said, saying her mother says she could “sing before she could talk.”

With a master’s in music education from Samford University, Hixson has taught young children to high schoolers for 25 years, but loves being a part of the “Montevallo family,” she said.

“She not only teaches music, but lives it,” MES Assistant Principal Haley Franks said.

“It’s the first time that’s happened,” Hixson said of so many coworkers coming to watch. “It’s exciting – the spirit of support.”

“I love the innocence they have,” she said. “They enjoy things like music and art.”

“9 to 5” tickets are available by calling the Virginia Samford Theatre box office at 251-1206 or by visiting Virginiasamfordtheatre.org. The theatre is located at 1116 26th Street South in Birmingham.

By NEAL WAGNER / City Editor Greater Shelby Chamber of Commerce leaders gave about 200 attendees an update on the past... read more