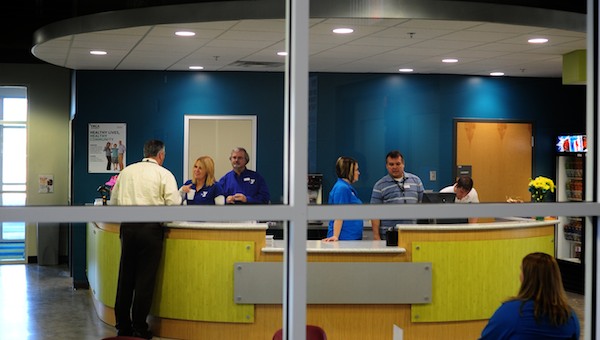 The Alabaster YMCA opened its new wing on Thursday, Jan. 31, giving the organization room to host all of its programs at the building on Plaza Circle (Reporter Photo/Jon Goering)

“We knew today was going to be a really busy day, but that’s fine,” Elmore said. “We are so excited to be here.”

Jan. 31 marked opening day for the about $1.7 million expansion to the Alabaster YMCA’s facility, which is on Plaza Circle off Alabama 119. The 18,000-square-foot addition more than doubled the size of the building, which was a former Body Shop gym purchased by the YMCA in 2010.

The new addition features a new YMCA-themed main entrance on the western side of the building, a few multi-purpose meeting rooms, concrete floors, a large gym, new locker rooms, an indoor whirlpool and an outdoor wheelchair-accessible swimming pool. Before construction began on the expansion, the Alabaster YMCA building already featured a large workout area and outdoor sports fields.

On Jan. 31, the YMCA was already hosting a CPR class in one of the multi-use rooms, and several employees were on-hand at the new main desk to show members around. Elmore said the organization was planning to host a Zumba class later in the day in the new gym.

The addition’s second floor houses the DAY Program for at-risk youth, and features several classrooms, offices and a computer lab. The DAY Program moved to the YMCA building from its current location near the Alabaster Senior Center.

Along with the new addition, the YMCA also added a new parking lot to handle the increased traffic at the building.

“Even with all the rain and bad weather we’ve had, we only opened a week later than we predicted,” Elmore said.

“I think the kids are the most excited about this,” Elmore said, noting the YMCA will hold its last programs at the old building on Feb. 1. “They are having a huge party tomorrow to celebrate moving to the new building.”

The old YMCA building is owned by the city of Alabaster, Elmore said.

FROM STAFF REPORTS MONTEVALLO – University of Montevallo junior Will Fulmer added another preseason honor Jan. 31 after being named to the... read more