Phelps continues a life of service

WILSONVILLE – Frances “Skeet” Phelps has spent her life serving others in many different capacities.

From serving in World War II with the U.S. Navy WAVES, or Women Accepted for Volunteer Emergency Service, to her latest project, raising funds to help Haiti’s poverty-stricken population, Phelps’ energy and drive belies her 90 years.

A Wilsonville resident, Phelps recently was recognized for her service in WWII with a display at the Birmingham Veterans Administration Medical Facility in Birmingham. 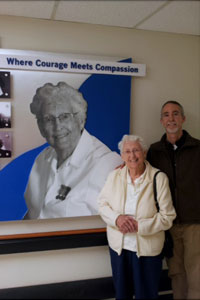 Phelps attended aviation machinist school during the war to learn to repair planes.

“Today, I could take apart a radial engine and put it back together,” Phelps said. “I just loved it.”

She later moved to Memphis, Tenn. to run sound systems and play film reels for entertainment and training for military men.

Phelps only left the Navy after she married a naval officer, and the two decided to start a family.

Prior to her 90th birthday in December, Phelps was involved with a Bible study on the country of Haiti with her church, Wilsonville Methodist Church.

After seeing the plight of the Haitians, Phelps decided to take action.

“Instead of people buying and sending cards or gifts and having a (birthday) party, I want people to contribute money to the Lambi Fund,” Phelps said.

The Lambi Fund of Haiti is a non-profit organization that is working toward economic justice, democracy and alternative sustainable development in Haiti, according to Lambifund.org.

Phelps started her “A goat for this old goat” campaign, which encouraged friends and family to donate funding to send a goat to Haiti, which costs $100 per goat.

“The money just started flowing,” Phelps said, while sitting at home during a Jan. 25 interview.

During her church’s Christmas party, attendees donated $323 instead of having a dirty Santa gift exchange.

Phelps also is promoting $30 donations toward sending honeybees to Haiti, because she used to keep beehives.

“Everyone at our church has gotten into it. It’s so exciting,” she said. “Instead of gathering in for me, things I don’t need, it’s giving to people who need.”

For more information about the Lambi Fund of Haiti, visit Lambifund.org.